Update Required To play the media you will need to either update your browser to a recent version or update your Flash plugin.
By Dan Friedell
03 January 2023


Pope Benedict, the retired leader of the Roman Catholic Church, died December 31. He became Pope in 2005 and retired from the position in 2013. Most popes serve until they die.

There are not many rules or traditions in place concerning retired popes. Benedict was the first pope to retire in 600 years.

Benedict took the title Pope Emeritus upon retirement. But, that led to some confusion among Roman Catholics over the next ten years. Followers wondered if they should honor official messages from Benedict as a new pope, Francis, was leading the Church. 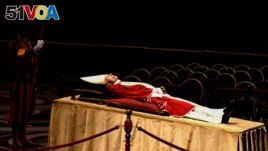 The body of Pope Emeritus Benedict XVI lays in state at St. Peter's Basilica in the Vatican, on January 2, 2023. (Photo by Tiziana FABI / AFP)

Some were unsure about who was in charge: the pope or the pope emeritus?

With the death of Pope Emeritus Benedict XVI, the question has been answered.

The Church's press office released a two-sentence announcement. No one rang the bells at St. Peter's Basilica in Vatican City, as would have been done with a serving pope. There was no official live statement to followers outside the basilica either. The Vatican response makes clear that Benedict stopped being pope upon retirement.

Experts say the death announcement was more like those that come with the death of other clergy, such as bishops.

Benedict is getting some important honors, however. For example, he is lying in state for three days inside St. Peter's Basilica. He is wearing the red robes of a pope for lying in state and the burial. Many thousands of visitors have paid their respects to Benedict there already. Pope Francis will lead Benedict's funeral on Thursday.

The Vatican says the service will be simple. It invited delegations only from Germany and Italy to attend. When a serving pope dies, the entire international community is invited to send delegates.

After the funeral, Roman Catholic Church leaders will start to think about some rules for future popes who decide to retire.

Some wonder if Pope Francis will make new rules for retired popes. Perhaps Francis himself will think about retiring.

Pope Francis said Benedict was "saintly and discreet" as pope emeritus. He said those qualities enabled Benedict to carry out retired life in a good way.

But Francis also said there should be some rules to guide future retirements. One likely change is to bar use of the title Pope Emeritus.

In 2021, lawyers who are experts in the workings of the Roman Catholic Church started a project to think about papal retirement. Among the proposals they produced was a new title for retirees: "bishop emeritus of Rome."

They also suggested a retired pope should not wear or use traditional clothing or objects used by a serving pope. The retired pope, the group said, should support the Catholic Church but not take part in high-level church meetings.

Such actions might help avoid problems and confusion, especially when a serving pope and retired pope disagree on issues.

Geraldina Boni is a professor of religious law at the University of Bologna who is part of the group. She said she thinks "appropriate ways will be found," so that followers are not confused.

Boni said the group was criticized for coming together in 2021. But, she said the need for rules about retirement "has been affirmed by high-level church" officials.

No one knows if the Vatican will consider the group's ideas. One observer, however, thinks Francis will now find it easier to think about his own retirement since Benedict set an example.

"We have to get used to the idea that popes will live long lives and that, in the end, just like my grandfather or your grandfather and everyone's grandfathers, they can't continue," he said. "But they are still part of the family, and this is something beautiful. It gives us a normal church, not a Martian or other-worldly one."

live –adj. done in front of an audience

robe –n. a long, loose piece of clothing that is worn on top of other clothes to show that someone has a high rank or an important job

appropriate –adj. right or correct for the situation

affirm –v. to say something is true or correct

blog – n. a website on which someone writes personal ideas or opinions

other-wordly – adj. not from earth or a place humans are familiar with