Update Required To play the media you will need to either update your browser to a recent version or update your Flash plugin.
By Dan Friedell
28 December 2022


Under a new National Security Strategy (NSS) and other documents, Japan will nearly double its defense spending and deploy missiles in a new way.

Since the end of World War II, Japan's military, called the Japan Self-Defense Forces, has held defensive, not offensive weapons. 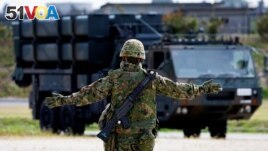 Under a new defense spending plan, Japan aims to purchase missiles that can hit military targets in other countries.

The spending means the world's third-largest economy will no longer spend the ninth-most on weapons and defense.

The new plan will increase Japan's spending from one percent of its gross domestic product (GDP) to two percent over the next five years. If this happens, Japan will move to third in the world in defense spending.

Japan will center its early spending on what it calls "counterstrike capability," or the ability to hit targets in other countries.

The move has been the subject of debate within in Japan, as the country's past guidelines restricted offensive weapons. Japan's constitution, written after World War II with American influence, bars it from making war.

The new defense ideas in the NSS note that having missiles that can hit foreign targets acts as a form of defense. But the new documents say striking first "remains impermissible."

Japan's military says it will purchase hundreds of U.S.-made Tomahawk missiles, which can travel up to 2,500 kilometers.

The new defense plan was developed because Japan believes that the security situation in the region is at its "most severe and complex" since the end of World War II.

Military experts say Japan's leaders are concerned that Russia's 2022 invasion of Ukraine may set an example for other nations to follow.

But leaders in China, North Korea and Russia denounced the plan. Russia criticized the plan as unrestricted "militarization."

James Brown is a professor at Temple University in Tokyo. He is a political science expert. Brown called the criticism "without foundation," meaning that it is not grounded in facts.

He noted that Russia, North Korea and China all have many long-range missiles.

gross domestic product (GDP) –n. all the good and services produced in a country in a year which is considered a good measure of the size of a nation's economy

counterstrike –n. a strike that is in reaction to a first strike

bold –adj. not afraid of danger or difficulty