Update Required To play the media you will need to either update your browser to a recent version or update your Flash plugin.
By Dan Novak
27 December 2022


Sometimes, what does not happen is what matters most.

By the evening of February 25 this year, Russia's troops had reached the edge of Kyiv, Ukraine's capital. The day before, Russian troops had crossed into Ukraine in the largest military attack in Europe since World War II.

Ukraine's defense ministry urged its people to build bombs to fight off the invaders. President Volodymyr Zelenskyy filmed himself on the streets of the city, promising to defend his country. 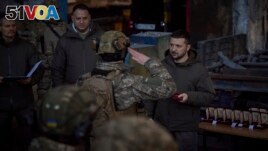 FILE - In this photo provided by the Ukrainian Presidential Press Office, Ukrainian President Volodymyr Zelenskyy, right, awards a serviceman at the site of the heaviest battles with the Russian invaders in Bakhmut, Ukraine, Tuesday, Dec. 20, 2022.

"Tonight, they will launch an assault," Zelenskyy said. "All of us must understand what awaits us. We must withstand this night."

Many had expected a quick Russian victory. But the assault never came. And 10 months later, Russia has pulled back its "special military operation" in some places.

Russian forces still control large areas of Ukraine's east and south. At least 40,000 civilians have been killed and 14 million displaced in the conflict. But Ukrainian forces, supported by billions of dollars in Western weapons, have effectively fought against the Russians.

In the United States, the sitting president's party, in this case, President Joe Biden's Democrats, usually loses many seats in the midterm elections.

So, many observers had predicted a large victory for the Republican Party. The Republicans did win control of the House of Representatives. But it was a small victory with a majority of fewer than 10 seats.

The Republicans ended up losing one seat in the Senate and several more races for governor.

In economics, most of the world's big central banks waited until March to begin raising interest rates. The European Central Bank did not move until July. Some complained that the delay enabled inflation to increase. And some feared that it could be costly in the long term.

There are early signs that inflation may have reached its highest point in some economies. The price of oil has gone down but could increase as European nations established a price limit on Russian oil products.

At the United Nations climate talks in Egypt, countries agreed to create a fund to help poor nations threatened by climate disasters. But they failed to agree on plans to cut emissions faster.

Meanwhile, there have been record heatwaves in China, floods in Pakistan and Europe, and glacier collapses in India, Italy and Chile. They were reminders of how fast our planet's climate is warming.

This was also the year that protests exploded in Iran after the death of 22-year-old Mahsa Amini. She was arrested by the morality police for wearing an "improper" head covering called the hijab. Witnesses said she was beaten, though Iranian officials denied that.

The protests, led mostly by women, spread throughout the country. They represented a threat to the government. In recent weeks, fewer morality police officers have been seen in Iranian cities. And more women have been walking the city's streets without wearing the hijab.

Cryptocurrencies greatly dropped in value following the collapse of FTX, one of the world's largest digital money exchanges.

Elon Musk bought Twitter. The billionaire cut half of its workforce and the social media company is in disorder.

It was the year Latin America moved to the political left, a ceasefire finally came in Ethiopia's civil war, and North Korea launched more missiles. It was also the year Britain lost a queen, gained a king, and saw three Prime Ministers.

emissions — n. the act of producing or sending out something

glacier — n. a very large area of ice that moves slowly down a slope or valley or over a wide area of land

exchange — n. a place where things or services are traded