Update Required To play the media you will need to either update your browser to a recent version or update your Flash plugin.
By Hai Do
21 December 2022

Biden told Zelenskyy that, "It's an honor to be by your side." He added that the U.S. and Ukraine would continue to project a "united defense" against Russia. 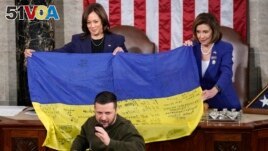 The Ukrainian president thanked Biden, U.S. lawmakers and the "ordinary people" of America for their support. Zelenskyy said he wanted to visit earlier, and his visit now showed the "situation is under control, because of your support." The American president then put his arm around Zelenskyy as they went inside for a meeting in the Oval Office.

At the joint news conference in the White House, Biden noted that Zelenskyy's visit came on the 300th day of Russia's invasion. He said, "As we head into the New Year, it's important for the American people, and for the world, to hear directly from you Mr. President about Ukraine's fight and the need to continue to stand together through 2023."

The Ukrainian President thanked Biden and the U.S. Congress for their continued support. He added Biden's efforts to bring international and allied support for Ukraine were important.

Zelenskyy said he "really wants" to win the war against Russia with U.S. and allied support before adding that he is "sure" Ukraine will win. He said that he wanted Americans to know that "we really fight for our common victory against this tyranny."

Zelenskyy then left for the U.S. Capitol where he was to address a joint session of Congress in the evening.

Zelenskyy headed to the United States after visiting troops Tuesday on the front line in the city of Bakhmut in Ukraine's disputed Donetsk area. He crossed into Poland early Wednesday before flying to Washington on a U.S. Air Force plane. The U.S. also worked with Zelenskyy on security, including the risk of Russian action while he was out of the country, a U.S. official told reporters.

Just before Zelenskyy's arrival, the U.S. announced $1.85 billion in U.S. military aid to Ukraine. The aid included the Patriot missile defense system and precision-guided bombs for its jetfighters. The Patriot missile is one of the most modern U.S. air defense systems. It can protect against attacking aircraft as well as cruise and ballistic missiles.

The U.S. Congress is also considering a vote on another spending measure that includes about $45 billion in emergency assistance to Ukraine.

Volodymyr Fesenko is head of the Penta Center in Kyiv. He said Zelenskyy's visit to the U.S. "should determine the course of the war — Zelenskyy for the first time dared to leave Ukraine and is counting on being able to maintain, and possibly even strengthen, U.S. military and economic assistance."

Hanna Danylovych lives in Kyiv and works as a scientist. Danylovych welcomed the promise of additional military supplies. Danylovych said, "There is a great desire and dream to speed up the removal of Russian evil from our land."

tyranny –v. cruel and unfair treatment by people with power over others

ballistic missile –n. a rocket able to travel a long distance with a powerful explosive

dare –v. to have the courage to do something