Update Required To play the media you will need to either update your browser to a recent version or update your Flash plugin.
By Dan Novak
18 December 2022

Experts warn the situation will worsen if existing water control policies are not enforced across the island.

"It is no longer possible to work in the fields as a farmer," said farmer I Ketut Jata. He said the land is too dry to grow rice which he sells to provide for his family. 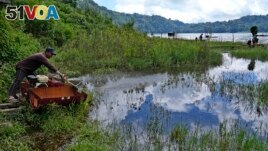 Bali is in the center of Indonesia's group of islands. Bali gets its water from three main sources: lakes, rivers and groundwater. A traditional irrigation system, called the "subak", sends water through a network of waterways, dams and tunnels.

The subak was named a UNESCO World Heritage site in 2012. The system is central to Balinese culture. It represents the Balinese Hindu idea of harmony between people, nature and spirituality.

"This is one of the very special cases of living landscapes in Asia," said Feng Jing, who works with UNESCO in Bangkok.

But demand is putting severe pressure on the subak and other water resources, said Putu Bawa. He is with the Bali Water Protection program.

The island's population increased by more than 70 percent from 1980 to 2020, to 4.3 million people, found government data. Tourism growth has been even greater: Less than 140,000 foreign visitors came to the island in 1980. By 2019, there were more than 6.2 million foreign and 10.5 million Indonesian tourists.

Bali's economy has done very well with tourism, but at a cost. Rice fields where the subak once ran through have been turned into golf courses and water parks. Forests that naturally collect water for the subak have been destroyed for new homes and hotels, Bawa said.

Stroma Cole is with the University of Westminster in London. She has researched tourism's impact on Bali's water supplies. Cole said the water table is also dropping because people and businesses use private wells instead of government-owned supplies. The water table is the upper level of an underground surface in which rocks or soil are always surrounded by water.

In less than 10 years, Bali's water table has sunk more than 50 meters in some areas. Wells are becoming dry or have been damaged with salt water, especially in the island's south.

Bali does have rules, like water permits and taxes on water used. They are meant to control the island's water supplies, but there is no enforcement, Cole said.

The serious effect of the water crisis can be seen in Jatiluwih, in northwestern Bali. The area has the island's largest rice farms.

For generations, farmers used the subak system for irrigation. But in the past 19 years, farmers have had to pump water through white plastic pipes to irrigate the fields.

Some Bali farmers say they can only get one rice harvest a year, instead of two or three because of limited water supplies, Cole's research found. That could reduce food production on the island.

When Indonesia closed its borders during the pandemic, Bali's tourism greatly dropped. Environmental activists hoped the closure would help raise water levels in the wells.

But development across the island has continued, including a new road that activists say will further affect the subak system. New hotels, homes and other businesses are also adding to the demand.

Bawa said tourism is important to Bali but there also should be better enforcement and increased monitoring to protect the island's water resources.

"We need to do this together for the sake of the survival of the island."

tourism — n. the activity of traveling to a place for pleasure

irrigation — n. to supply with water by using artificial means

tunnel— n. a passage that goes under the ground, through a hill, etc.

harmony — n. a pleasing combination or arrangement of different things

landscape — n. an area of land that has a particular quality or appearance

monitor — v. to watch, observe, listen to, or check for a special purpose over a period of time