Update Required To play the media you will need to either update your browser to a recent version or update your Flash plugin.
By Bryan Lynn
12 January 2023


Some Ukrainian soldiers are spending time at a recovery center designed to help them deal with the harmful effects of war.

A Ukrainian military commander created the recovery center in Kharkiv. The building served as a long-term rehabilitation hospital when Ukraine was part of the Soviet Union.

Army commander Oleksander Vasylkovskyi said the recovery center is able to treat both physical and mental conditions. "This rehabilitation is helping soldiers, at least for a week, to put themselves together," he told The Associated Press. 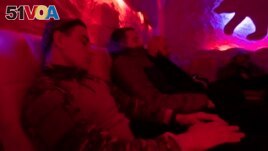 Vasylkovskyi remembers how soldiers suffered silently after returning home from fighting Russia in Ukraine's Donbas area in 2014. Suicide rates among veterans increased in the following years, with many untreated cases of post-traumatic stress disorder. Vasylkovskyi says he hopes such centers can raise awareness of the need for mental health care and prevent suicides in the future.

Soldiers visiting the center are offered a series of different treatments. These include water therapy in a hot pool to heal muscle pain, red light therapy to improve heart and blood circulation and a salt room to improve breathing. Some also receive electrosleep therapy — a method of electrotherapy that some believe can calm the nervous system and cause sleep.

Psychologists are also available at the center to advise soldiers and their families.

Vasylkovskyi says visitors also have full medical examinations. "It's the most important thing because a person develops several illnesses from the stress of fighting."

"If someone has trauma and cannot walk, my department will put them back on their feet," said Artem. He is a physical therapist working at the center who only wanted to give his first name for security reasons.

More than 2,000 soldiers have been treated at the center since it opened in June. It receives support from international partners in Latvia, Lithuania, Romania, Poland, the United States and Spain. The cost of one day of rehabilitation for one soldier is around 20 euros, Vasylkovskyi said. But more financing is needed, he said, "because (the war) is not over."

One soldier treated at the center spoke to the AP. He only wanted his first name, Viktor, to be used. He said he worked as a miner before joining the army. He took part in the military operation that pushed Russian occupying forces out of the Kharkiv area.

For months, he said he slept in cold, wet trenches. "We worked in conditions that were bad for our health," Viktor said. "We have back pain, leg pain, we carry heavy equipment."

But after four days at the rehabilitation center, Viktor said he felt reenergized. "I'm already determined to go further, continue my work, destroy the enemy, and bring us each day closer to victory," Viktor said.

One of the most desirable things about the center might be the fact that soldiers have the ability to bring family members along to spend a few days with them.

Maksym, who, like Viktor, did not want to give a last name for security reasons, had not seen his wife and son in five months. One of the hardest parts of the war, he said, is when "you cannot connect and speak to your loved ones."

He was able to spend a few days with family at the center. "I can see that men are returning to the unit after a week, rested and gaining more strength," Maksym said about time spent at the center. "And the thoughts that they had before go away."

When asked how many soldiers he served with were lost in the war, Maksym lowered his eyes and said, "Too many."

rehabilitate – v. help someone live a normal life again after they had a serious illness of spent time in prison

post-traumatic stress disorder – n. a mental condition in which a person suffers severe anxiety and depression after a very frightening or shocking experience

therapy – n. a treatment that helps someone feel better or grow stronger

trench – n. a narrow hold dug in the ground

damp – adj. slightly wet in a way that is not pleasant or comfortable

determined – adj. wanting to do something very much and not permitting anyone to stop you

unit – n. a group of people living or working together, especially for a particular purpose