US Transportation Official Warns on Weight of Electric Vehicles

Update Required To play the media you will need to either update your browser to a recent version or update your Flash plugin.
By Dan Friedell
15 January 2023


As electric vehicles become more popular in the United States, a government safety expert is expressing concern about the automobiles.

Jennifer Homendy runs the National Transportation Safety Board, or NTSB. In a recent speech, she noted that manufacturers are making electric cars heavier and heavier.

This is a problem in crashes with lighter, traditional cars. 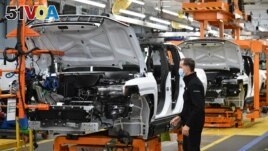 Homendy said she is worried about "increased risk of severe injury and death for all road users." She noted the size and power of the newer vehicles.

The electric vehicles need large, heavy batteries in order to travel the longer distances many drivers seek. Experts say it will take years to develop smaller batteries that provide the same result.

Homendy said she is pleased that President Joe Biden wants to reduce the number of vehicles that harm the environment. But she is still concerned about the risk from heavy vehicles.

"We have to be careful that we aren't also creating unintended consequences," she said.

Some of the new electric vehicles that are expected to be popular include Ford's F-150 truck and Mustang Mach E. She said they are hundreds of kilograms heavier than their gasoline-powered versions.

The NTSB investigates accidents but does not make rules. New rules must come from the National Highway Traffic Safety Administration.

Michael Brooks runs the Center for Auto Safety. He has the same concerns as Homendy. He said there has been little research about the growing weight of electric vehicles. He pointed to a 2011 study that showed a crash including a vehicle with about 500 extra kilograms increased the chances of death by 47 percent.

That study does not take into account design changes that make it hard to see from the new electric vehicles. He also said the electric vehicles can reach top speed faster than gas-powered cars.

"These bigger, heavier batteries are going to cause more damage," Brooks said. "It's a simple matter of mass and speed."

unintended –adj. not on purpose

consequence –n. something that happens after a prior action