Update Required To play the media you will need to either update your browser to a recent version or update your Flash plugin.
By Bryan Lynn
14 December 2021

The Air Force does not provide information on what kind of discharge a service member receives. But legislation currently before Congress limits the military to giving members who refuse the vaccine either an honorable discharge or a general discharge under honorable conditions. 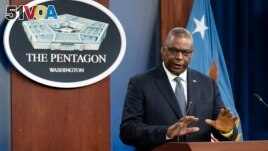 In this file photo, U.S. Secretary of Defense Lloyd Austin speaks during a media briefing at the Pentagon, Nov. 17, 2021, in Washington. (AP Photo/Alex Brandon, File)

In August, the U.S. Department of Defense ordered all military forces to get vaccinated against COVID-19. Defense Secretary Lloyd Austin described the vaccine as critical to keeping troops healthy and ready to deploy when needed.

Each military service sets its own dates for members to complete the requirement. The Air Force gave its forces until November 2 to get the vaccine. Thousands have either refused or sought an exemption to the rule. Exemptions are offered for some medical or religious reasons.

Air Force spokeswoman Ann Stefanek said none of the 27 members who were discharged had sought vaccine exemptions. She said all of the airmen were in their first term of military service.

Stefanek said each were discharged for failing to obey an order. Some might have had other violations on their records, she added, but all had the vaccine refusal as one of the elements of their discharge.

The latest Air Force data shows that more than 1,000 airmen have refused to get the COVID-19 vaccine. More than 4,700 are seeking a religious exemption. The military reports 97 percent of active duty Air Force members have gotten at least a first vaccine injection. That is a greater share than found among the U.S. general population, health officials report.

As of December 10, the Defense Department said that 96.4 percent of active duty members had gotten at least one vaccine shot. That number drops to about 74 percent, however, when the National Guard and Reserves are included. The U.S. Centers for Disease Control and Prevention says that about 72 percent of the U.S. population has received at least one COVID-19 shot.

The Associated Press and Reuters reported on this story. Bryan Lynn adapted the reports for VOA Learning English. Caty Weaver was the editor.

exemption – n. special permission not to have to do something

Reserve – n. U.S. military forces that are not part of the regular active duty services