US Police Officials Examine Use of Force Rules

Update Required To play the media you will need to either update your browser to a recent version or update your Flash plugin.
By George Grow
05 December, 2014

The Obama administration has established a federal task force to examine policing policies. The group will investigate the use of force in detaining suspects. the administration's move follows demonstrations in cities across the United States.

Demonstrators have been protesting two recent grand jury rulings. In Missouri, a grand jury decided last week not to charge a white police officer in the shooting death of an unarmed African-American teenager. This week, jurors in New York decided not to indict another white officer in the death of an unarmed African-American man. 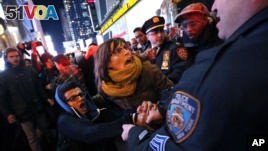 Police arrests protesters rallying against a grand jury's decision not to indict the police officer involved in the death of Eric Garner attempted to block traffic at the intersection of 42nd Street and Seventh Avenue near Times Square, Thursday, Dec. 4, 2014, in New York. (AP Photo/Jason DeCrow)

How a grand jury works is a mystery to most Americans. A grand jury is a group of private citizens. Their job is to decide whether to approve criminal charges.

Unlike trial juries, grand juries only hear evidence presented by a government lawyer. Charges are brought if the jury decides there is "probable cause" that the crime took place, and that a person or persons may have been responsible.

On Wednesday, protesters gathered in the New York City neighborhood where Eric Garner died of a heart attack. He collapsed after police arrested him on suspicion of selling cigarettes illegally.

A widely seen video of the arrest shows police officer Daniel Pantaleo putting Eric Garner in a chokehold, an action banned by the police department. New York's medical examiner has ruled the death a homicide; in other words, the killing of one person by another.

"You've got to be kidding me. They didn't indict him? Why, where's the justice at?

The U.S. Justice Department says it will investigage whether Eric Garner's civil rights were violated when the police officer put him in a chokehold. In Washington, Attorney General Eric Holder spoke to reporters.

"Mr. Garner's death is one of several recent incidents across our great country that have tested the sense of trust that must exist between law enforcement and the communities they are charged to serve and to protect."

There have been several cases of deadly incidents involving police and African-Americans this year. The killing of 18-year-old Michael Brown last August fueled racial tensions. Police officer Darren Wilson said he feared for his life after Brown attempted to take his gun.

Last month, an Ohio police officer shot and killed a 12-year-old African-American boy. The shooting took place less than two seconds after the police car pulled up to the boy. He was carrying an unloaded pellet gun -- a device also known as an air gun. To date, no charges have been brought against the officer.

On Monday, President Barack Obama met with civil rights leaders, law enforcement officials and others. Mr. Obama said he will push for reforms in city police departments because of the high rates of police shootings involving African-Americans.

"The frustrations that we've seen are not just about a particular incident. They have deep roots in many communities of color, who have a sense that our laws are not always being enforced uniformly or fairly."

Civil rights leaders like Al Sharpton have criticized police for having an aggressive way of thinking towards young African-Americans and other minorities.

"What I'm afraid of is that there will not be indictments of police officers for killing unarmed people. That is what I am afraid of. I think we are so busy promoting the reaction to injustice that we are not reacting to injustice."

The mayor of New York announced on Thursday that police officers will attend three days of training in an effort to reduce unnecessary use of force. He said the move shows all New Yorkers that they will be treated equally.

And that's In The News from VOA Learning English. I'm Anne Ball.

*This report was based on stories from VOA reporters Chris Simkins and Carolyn Weaver. George Grow wrote this story for VOA Learning English. Hai Do was the editor.

federal - adj. of or having to do with a national or central government

jury - n. a group of people chosen to decide what is true in a trial

criminal – adj. involving illegal activity; n. a person who is responsible for a crime

indict - v. to decide to charge someone with a crime