Vietnam Removes Law Book with 'Justice' on the Cover

Update Required To play the media you will need to either update your browser to a recent version or update your Flash plugin.
By VOA
19 November, 2014


A state-owned book publisher in Vietnam has withdrawn hundreds of law books because of the protest over the book's cover.

The Labor and Social Affairs Publishing House published 500 copies of the book on Vietnam's civil code earlier this year. The cover of the book features a digitally changed image of a man without clothing holding the scales of justice.

The book's cover went viral recently on social media networks in Vietnam, leading to public protests of the image. 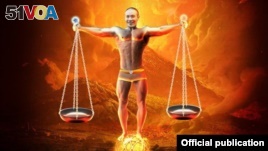 The book cover features a muscular male body that was changed to have the face of Cong Ly, a popular comedian whose name literally means ‘justice' in Vietnamese.

The image has reportedly been taken off Internet sites viewed inside Vietnam.

A representative for the publisher, Nguyen Thi Thuy, blames its partner, the Lao Dong Bookstore, for releasing the book.

"There is no such image in the contract. They published that cover without our consent. We have explained our responsibility. Now it is up to the relevant authorities to decide. They are investigating."

One employee has lost his job as the result, and the bookstore could not be reached for comments.

The public has used the event as a chance to mock Vietnam's legal system.

"Justice in Vietnam is just a comedy. The publishing house is brave to say the truth," one commenter wrote on the VOA Vietnamese Facebook page.

The publishing house has apologized to the comedian, but local media reports say he has threatened to take legal action.

*This report was produced in collaboration with the VOA Vietnamese Service. Ashley Thompson adapted the story for VOA Learning English. Hai Do was the editor.

viral – adj., relating to or involving an image, video, piece of information, etc., that is circulated rapidly and widely from one Internet user to another

mock – v., to laugh at or make fun of (someone or something) especially by copying an action or a way of behaving or speaking

Now, it's your turn to use these Words in this Story. In the commentssection, write a sentence using one of these words and we will providefeedback on your use of vocabulary and grammar.