Update Required To play the media you will need to either update your browser to a recent version or update your Flash plugin.
By VOA
14 November, 2014


President Barack Obama met Friday with Aung San Suu Kyi in Myanmar, also known as Burma. After the meeting, the Nobel Peace Prize winner told reporters her country's democracy process has slowed. And she said its constitution is "unfair, unjust, and undemocratic." The constitution bars anyone with strong ties to a citizen of another country from being a candidate for president. Aung San Suu Kyi's sons are British citizens, as was her husband.

President Obama met on Thursday with Myanmar's President, Thein Sein. Mr. Obama went to Myanmar for a meeting of the Association of Southeast Asian Nations. He is also attending the East Asia Summit. That group includes the 10 nations of ASEAN plus the United States, China, Russia and India.

Iraqi officials say government troops have forced Islamic State militants from the town of Beiji, north of Baghdad. The militants had captured Beiji and its oil processing center during their offensive across northern and western Iraq earlier this year. 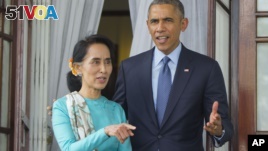 Israel is permitting Muslims of all ages to attend religious services Friday at the Temple Mount. That is the holy place in Jerusalem that Muslims call the al-Aqsa mosque.

Israel had recently restricted attendance at the mosque to women and men 35 years of age and older. Israeli officials were worried that younger Muslims would incite violence.

The decision to lift the age restrictions was announced after U.S. Secretary of State John Kerry met separately with Israeli, Palestinian and Jordanian leaders.

Afghanistan's new president is in Pakistan for his first visit to the country since taking office. Pakistan state television reported that Ashraf Ghani went to Pakistani army headquarters in Rawalpindi on Friday.

VOA's correspondent in Islamabad says Mr. Ghani will meet with Pakistani Prime Minister Nawaz Sharif on Saturday. The two men are expected to talk about reports that Pakistan's military supports the Taliban in Afghanistan.

constitution – n. a document that describes the system of beliefs and laws by which a country, state, or organization is governed

unjust – adj. not fair or deserved; not just

militant – n. someone active in trying to cause political change, often by the use of force or violence

holy – adj. connected to a god or a religion

incite – v. to cause (someone) to act in an angry, harmful, or violent way

Now, it's your turn to use these Words in The News. In the comments section, write a sentence using one of these words and we will provide feedback on your use of vocabulary and grammar.