US Voters to Elect New Congress

Update Required To play the media you will need to either update your browser to a recent version or update your Flash plugin.
By Christopher Cruise
02 November, 2014


Americans are preparing to vote in midterm elections Tuesday.

Voters will fill all 435 voting seats in the United States House of Representatives. They will also elect -- or re-elect -- one third of the 100 members of the US Senate. Senators serve six-year terms. House members are required to seek re-election every two years. 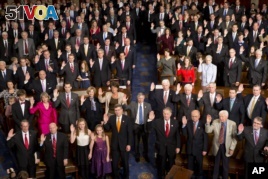 Members of the 113th Congress, many accompanied by family members, take the oath of office in the House of Representatives chamber on Capitol Hill in Washington, Thursday, Jan. 3, 2013. (AP Photo/J. Scott Applewhite)

Many Americans know little about how Congress operates. If they want to learn, they have to read books, watch television programs or attend classes. In Washington, DC, some adults can attend a 10-week long class called "Understanding Congress." It is taught at the Graduate School USA. Many of the students are federal employees.

Michael Flanagan is teaching the "Understanding Congress" class. Mr. Flanagan is from Chicago, Illinois. He served as a member of the House of Representatives for one two-year term in the 1980s.

Some Americans say Congress does not work. In fact, studies have shown that Congress is very unpopular. The Pew Research Center has been following public opinion of Congress since 1985. Studies found that the public approval rating for Congress has gone from 67 percent in 1985 to just 28 percent this year. Many voters do not think Congress is able to do its job. The Pew Center found that Americans see the current "Congress as one of the least productive in almost 20 years."

Michael Flanagan says that if few Americans know or care what really happens in the House and Senate, Congress itself is partly to blame.

"Well, Congress is big and it's complicated and, moreover, we have gone out of our way to make it mysterious."

Members of the House and Senate often speak in a strange language. Some of their rules and traditions are centuries old. Some members of Congress appear to dislike one another and criticize their opponents' actions. But they still call each other "friend," and use expressions like "the distinguished gentleman."

But the former lawmaker says Congress is really not very difficult to understand. He says the reason voters know so little about it is because they are not taught much about it. He says American schools should do a better job of teaching how the country is governed.

"People don't understand how their government works -- it's all very big and mysterious and, and ‘It never does what I want it to do' and therefore it's wrong. And we really would do well to teach our kids -- and teach ourselves -- how this process works. There's nothing mysterious about it -- men and women of average intelligence and, and of average capacity manage the government."

Michael Flanagan tells his students that Congress is the first, and most important, branch of the U.S. government. He notes that when the nation was formed, Congress created the presidency and the court system.

Mr. Flanagan notes that as many as 10,000 bills are written during the House's two-year term. He says only a few hundred of the proposals are approved. During that two-year period, House members may vote more than 1,000 times.

Many people members of Congress talk with are unhappy with the lawmakers, and often criticize their work. But Michael Flanagan says serving in Congress is a chance to make history and affect people's lives in a positive way.

"You get to shape the future of the nation in some small way. You also get to do tremendous things for your district if you take that portion of your job seriously -- which I did and, and most do. It's a, it's a, it's a parade of, of really getting to get the things that you want done done, you know, and, and there's a great satisfaction that comes with that in any walk of life."

He adds that being a member of the House or Senate is "a wonderful job and a horrible life."

Although the job can be difficult, many Americans want to serve in Congress. And once they are in office, few are defeated for re-election. Political experts say at least 90% of those who seek reelection to the House and Senate will win.

Some House districts are firmly under the control of one of the two main parties. As a result, the representative's re-election is guaranteed. The Cook Political Report says over 60 members of the House will not have an opponent in the elections on Tuesday.

The Center for Responsive Politics has studied the cost of U.S. elections. The non-profit group found two years ago, candidates who were elected or re-elected to a House seat spent, on average, more than $1.6 million. The winning Senate candidate spent an average of more than $10 million. The center says almost $3.7 billion will be spent on congressional election campaigns this year. That is the highest amount for a mid-term election in the history of the United States.

VOA correspondent Christopher Cruise reported and wrote this story for Learning English. George Grow and Hai Do edited it.

employee – n. a person who works for another person or for a company for wages or a salary

unpopular – adj. not liked by many people; not popular

distinguished – adj. known by many people because of some quality or achievement

defeated – adj. used to describe someone or something that has lost a contest or game

guaranteed – adj. protected or promised by a guarantee

Now it's your turn to use these Words in This Story. In the comments section below, write a sentence using one of these words and we will provide feedback on your use of vocabulary and grammar.