Where Is Kim Jong Un?

Update Required To play the media you will need to either update your browser to a recent version or update your Flash plugin.
By Christopher Cruise
10 October, 2014


North Korean leader Kim Jong Un failed to appear at a holiday celebration Friday in the North Korean capital, Pyongyang. More than a month has passed since a new photograph of him appeared or he was reported seen in public. Some observers wonder if the North Korean leader is in poor health, or if there is a struggle for power in the country. The longer Mr. Kim remains out of sight, they say, the more questions there are about his rule.

Friday marked the 69th anniversary of the founding of the Korean Workers' Party. The leader of North Korea usually visits the Kumsusan Palace of the Sun on October 10th. On Friday, North Korean state media did not say whether Kim Jong Un was there. Mr. Kim has visited the palace the past two years. It is where the remains of his father and grandfather are kept. North Korea's state-controlled media reported on the earlier visits in great detail.

Kim Jong Un is thought to be 31 years old. He has not been seen in public since he attended a musical performance on September 3rd. 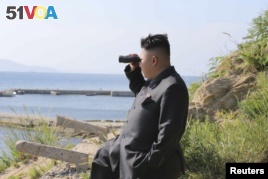 North Korean leader Kim Jong Un looks through a pair of binoculars during an inspection of the defense detachment on Ung Islet, in an undated photo released by North Korea's Korean Central News Agency on July 7, 2014.

Little is known about North Korea's secretive leadership. Earlier this year, state television broadcast video images of Kim Jong Un having trouble walking. This was a rare public sign of physical problems for a leader described by his government as strong and infallible.

Some people who saw the video said Mr. Kim could be suffering from gout, diabetes or high blood pressure. Earlier this week, VOA reported that some observers think doctors may have operated on his leg. Other reports claim that he has been ousted from power and his sister is now leading the country.

Recently, a group of high-level North Korean officials attended the closing of the Asian Games in South Korea. Among them was Hwang Pyong So. He is said to be the second-most-powerful man in North Korea. This led some observers to think that there may have been a change in leadership. But South Korea's Unification Ministry says it believes that Kim Jong Un is still in control of the North. Ministry spokesman Lim Byeong-cheol reported on recent talks between North and South Korean officials.

Lim Byeong-cheol says the North Korean officials were carrying a message from Kim Jong Un to South Korea's President, Park Geun-hye. He says based on this message -- and information from the Korean People's Army General Political Bureau -- it appears Kim Jong Un has not been ousted.

Kang Chul-hwan is an expert at the North Korea Strategy Center in Seoul. He says this is not the first time a North Korean leader has disappeared from public view after an operation.

Kang Chul-hwan says Kim Il Sung was not seen for some time after he had surgery to remove a cancerous growth. And he says Kim Jong Il disappeared for a time after he was injured while riding a horse.

Kang Chul-hwan is worried that a change in the country's leadership could affect security on the Korean peninsula.

He says the North must have stable leadership if it wants to improve relations between the two countries.

South Korean officials say they are not worried about instability in the North Korean leadership. But concerns may increase the longer Kim Jong Un is not seen.

Correspondent Brian Padden reported this story from Seoul. Christopher Cruise wrote it for VOA Learning English and produced the program. George Grow was the editor.

celebration - n. a party or other special event for an important occasion or holiday

struggle – v. to try very hard to do, achieve, or deal with something that is difficult or that causes problems

gout – n. a disease that causes painful swelling of the joints especially in the toes

diabetes – n. a serious disease in which the body cannot properly control the amount of sugar in the blood because it does not have enough insulin

oust – v. to cause or force (someone or something) to leave a position of power or a competition