Update Required To play the media you will need to either update your browser to a recent version or update your Flash plugin.
By VOA
09 October, 2014


United Nations Secretary General Ban Ki-moon has called for a huge "resource mobilization" to deal with the Ebola outbreak in West Africa.

Mr. Ban spoke Thursday in Washington, D.C. at a World Bank meeting on Ebola. The meeting included presidents from the West Africa countries of Guinea, Liberia and Sierra Leone who joined in through videoconference.

The UN Secretary General said the effort should include deployment of mobile laboratories, vehicles, helicopters, protective equipment, trained medical workers, and medical withdrawal capabilities to deal with the outbreak. 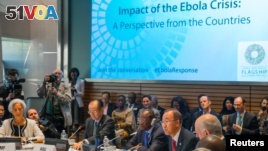 World Bank Group President Jim Yong Kim told the group that "nothing less than the future of Africa is at stake" unless Ebola can be stopped.

The call to action came as the outbreak spread beyond Africa to other parts of the world.

In the U.S., a Liberian man, Thomas Eric Duncan, died of the virus Wednesday at a hospital in Texas. Mr. Duncan had traveled to the U.S. from West Africa on September 20. Health officials are observing 48 people who had or may have had contact with Mr. Duncan before his death.

In Spain, government officials say the condition of Ebola patient Teresa Romero is worsening. Ms. Romero is the first person known to have become infected with Ebola outside of Africa. She had been treating a priest in Spain who was infected in Africa. He died of the disease.

In Australia, health officials are waiting for test results on a 57-year-old nurse with an above average body temperature. The nurse developed the low fever shortly after her return from Sierra Leone. She had worked with Ebola patients there.

Turkish Foreign Minister Mevlut Cavusoglu said "it's not realistic to expect that Turkey will lead a ground operation on its own" against the Islamic State militants in Syria.

Turkey is facing pressure from the U.S. and its allies to intervene in Kobani. The Syrian town is located just across the Turkish border where the IS militants have been fighting Kurdish fighters for weeks.

The U.S. has led airstrikes against militant targets in the area but the battle has continued to intensify.

Where is Kim Jong Un?

North Korean leader Kim Jong Un has not been seen in public for more than a month. His last public appearance was September 3 at a concert by his favorite pop group, the Moranbong Band. Mr. Kim chose the members of the all-girl group.

Two months earlier, Mr. Kim was seen limping at a ceremony to mark the 20th anniversary of the death of his grandfather, Kim Il Sung.

Kim Jong Un's absence has led to questions about his health and political situation.

future – n. the time after now; adj. in the time to come

fever – n. a body temperature that is higher than normal

limp – v. to walk in a slow and awkward way because of an injury to a leg or foot