Update Required To play the media you will need to either update your browser to a recent version or update your Flash plugin.
By VOA
18 November, 2014


Israeli police say two Palestinians have killed at least four rabbis and wounded six others in an attack at a Jewish holy place in Jerusalem. Police killed the two attackers.

The attack took place at a synagogue in West Jerusalem. The synagogue is in a Jewish neighborhood with a large number of Western immigrants.

Israeli police identified the dead as Israelis with double nationality, three Americans and one Briton.
An Israeli police spokesman said the attackers used knives and a gun. 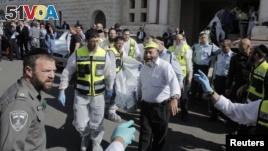 Israeli emergency personnel carry a covered body from the scene of an attack at a Jerusalem synagogue, Nov. 18, 2014. (REUTERS/Ammar Awad)

Israeli Prime Minister Benjamin Netanyahu has promised to strongly answer the attack. He blamed what he called incitement by the militant Palestinian group Hamas and Palestinian Authority President Mahmoud Abbas.
Abbas condemned the attack. He said he condemns the killing of civilians by any and all people.

Hamas praised the attack, calling it an answer to continued Israeli crimes.

Secretary of State John Kerry says he is hopeful the U.S. and five other nations can reach a deal with Iran on its nuclear program. But he said Tuesday that he will not make any predictions.

Negotiators from Iran and the so-called P5+1 group that includes the United States, Britain, China, France, Russia and Germany are meeting again Tuesday in Vienna, Austria. The two sides are trying to reach a deal that guarantees that Iran's nuclear program is peaceful.

They have less than a week to reach an agreement before the end of a temporary agreement reached last year.

Iranian media reported Foreign Minister Javad Zarif said Tuesday that a deal is still possible. He reportedly warned the international side to not make "excessive demands" of Iran.

Ukraine's military is preparing for a possible Russian-backed rebel attack. Recent reports have said Russian soldiers have been crossing the border into eastern Ukraine.

Ukraine's President Petro Poroshenko spoke Monday with the German newspaper Bild. He said that his country is ready for total war.

Ukraine's military is increasing its defenses a few kilometers from rebel-held territory in the Luhansk region. Rebels have been firing at the Ukrainian position.

Moscow has repeatedly denied directly supporting the rebellion in eastern Ukraine. It says Russian troops fighting alongside pro-Russian separatists are serving as volunteers.

The rebels said they fear it is the Ukrainian forces who are planning an offensive.

State of emergency declared in Ferguson

The governor of the central U.S. state of Missouri has declared a state of emergency. Jay Nixon made the call as a jury decides whether a police officer will be charged in the deadly shooting of an unarmed teenager.

Mr. Nixon said the emergency order requires the National Guard to assist state security forces in case of violence in the town of Ferguson. That is where police officer Darren Wilson shot and killed the teenager, Michael Brown. Protests, some violent, have followed the killing. Officials are especially concerned that a decision in support of Mr. Wilson could lead to more violence.

synagogue – n. the house of worship and communal center of a Jewish congregation

prediction – n. a statement about what will happen or might happen in the future

jury – n. a group of people who are members of the public and are chosen to make a decision in a legal case

barrier – n. something (such as a fence or natural obstacle) that prevents or blocks movement from one place to another