US Schools Struggle with Behavior, But See Opportunity

Update Required To play the media you will need to either update your browser to a recent version or update your Flash plugin.
By Dan Novak
12 April 2022


American students had been learning from home for more than a year during the pandemic. When they returned to in-person learning, teachers began to see more behavioral problems.

Sarah Potpinka is an art teacher at Putnam High School in Connecticut. She said, "Coming back into the building a lot of kids fell out of the good habits they had built up in previous years."

Potpinka said she saw more fights and arguments among students online and in person. Some refused to wear the required face coverings. Other students broke school rules by leaving in the middle of class to meet up with friends. 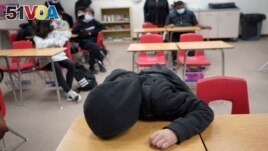 An unidentified student rests on his desk as the Mojave Unified School District. (AP Photo/Damian Dovarganes)

"Obviously throughout this pandemic, the students spent a lot of time at home and because of that they lack in those social skills," said Danielle Trejo. She is a school counselor in Austin, Texas.

Bad behavior among students is part of what experts are calling a mental health crisis among children. Even before the pandemic, research found that bad behavior in the classroom was increasing.

A group of mental health organizations says in a recent Hopeful Futures Campaign report that one in three students reported feeling lonely or hopeless. Half of all mental illness presents by the age of 14 but few students get the services they need. The report, released last month, also warns that suicide is the second leading cause of death among those aged 14 to 18 in 2019.

Richard Douglas is a school psychologist at Putnam High School with over 30 years of experience. He agrees that the mental health crisis existed before the pandemic.

Douglas said that during the pandemic there have been many things that disrupt families. More time at home could lead to more arguments with family members. A parent or family member could have gotten sick with COVID or lost a job, leading to more stress, Douglas said. At Putnam, many students also work to help pay for housing costs.

Douglas feels school officials provide enough support to deal with the crisis at Putnam. For the school of around just 250 students, there is also a counselor, social worker, and two recently hired interventionists. Interventionists help identify learning and behavioral problems among students.

But many school systems around the U.S. say they need more psychologists and counselors. The Hopeful Futures Campaign report says most American states do not provide enough resources for mental health support in schools.

Only Idaho and the District of Columbia go beyond the nationally recommended number of one psychologist for every 500 students. In some states, including West Virginia, Missouri, Texas and Georgia, there is only one school psychologist for over 4,000 students.

Despite behavioral problems among students after returning to in-person classes, Potpinka said the change has been better for the students. She said it is easier to keep students engaged in schoolwork face-to-face. It is also easier to seek help for them when there is trouble.

Douglas added that school psychologists are now trying "to undo the harm that's been done" during the pandemic.

Dan Novak wrote this story for VOA Learning English, with additional reporting by The Associated Press.

obviously — adv. in a way that is easy to see, understand, or recognize

disrupt — v. to interrupt the normal progress or activity of

stress — n. a state of mental tension and worry caused by problems in your life, work, etc.

recommend — v. to suggest that someone do something

engage — v. to get and keep someone's attention, interest, etc.