Update Required To play the media you will need to either update your browser to a recent version or update your Flash plugin.
By Faith Pirlo
27 March 2022


About 40 children have already started private classes in Berlin, just weeks after fleeing the war. Two teachers, who also fled to Germany, welcomed the children into their new classroom.

Millions of Ukrainian refugees have crossed into neighboring countries, like Poland, as the war in Ukraine continues. Many have made their way to other European countries like Germany.

The refugees are trying to rebuild their lives. Some have already started the necessary routines like going to school. 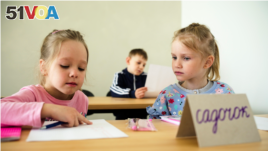 Mariia Kerashchenko is a mother of two children and a Ukrainian refugee in Germany. She just sent her seven-year-old son, Myroslav, to his first day of school with about 40 other children.

With tears in her eyes, 30-year-old Kerashchenko told a reporter, "It gets me emotional when I see all the help and solidarity here."

"Every day, I hope that we can go back to Ukraine, but it is too dangerous for now, so in the meantime it is wonderful that my son can go to school in Germany," she added.

The lessons will help prepare the children to enter the normal school system in Berlin. Burcak Sevilgen and Faina Karlitski organized the volunteer initiative for the refugees. In two weeks, the two raised money, organized the cost-free classrooms, and advertised the program on a messaging service.

The children were nervous as they entered the building with their schoolbooks and pencils. But they can look forward to three hours of lessons a day. They will follow their curriculum from Ukraine and also take German language classes. The children are able to take part in after-school activities like painting and other arts and crafts.

Two Ukrainians, Natalia Khalil and Tatjana Gubskaya, will teach the students. Natalia, from western Ukraine, is age 33. She is teaching the third and fourth graders. Tatjana is age 56. She is teaching second graders like she did back home. She will also teach first graders. Gubskaya fled Ukraine with her daughter and a seven-year-old grandson. He is in her classroom.

"The kids are grateful to have some kind of routine again and meet other children from Ukraine — they and their mothers have all been very stressed lately," said Gubskaya.

The teachers will be paid in donations, about $550 a month, until they are officially permitted to work.

Burcak Sevilgen is a teacher in Berlin and her friend Karlitski is an administrative advisor. Together, they wanted to help get at least a few of the refugee children back to school quickly. They spent all of their free time organizing the classes. They raised money and organized classes with help from a Berlin children's support program called Arche.

"We both have always had an eye for social issues and wanted to help here as well," Sevilgen said.

The program received an offer for rooms at no cost in a Berlin immigrant neighborhood. The Ukrainian refugee mothers in Berlin connected with the program on a messaging service called, Telegram.

Since men ages 18 to 60 in Ukraine are not permitted to leave, the majority of Ukrainian refugees are women, mothers and their children. Three million Ukrainians fled abroad and another six million are without homes inside of Ukraine's borders.

Every day about 10,000 refugees arrive to Berlin in trains. Germany has registered almost 250,000 Ukrainian refugees already. But the real number of refugees is unknown because thousands more have arrived by car. They are usually not registered if they come by car.

Ukrainians do not need a visa to enter the country. Many of the refugees are staying in shelters or with relatives who immigrated in earlier years. Some Ukrainians are even staying at an old airport.

The government is organizing a task force to help refugee children to attend schools in 16 German states. Many schools, including private ones, have taken in a few Ukrainian students. Berlin officials are creating a special welcome class for the children and will include German language classes.

A similar program to this was used to help immigrant children attend school in 2015 and 2016 when 1 million people fled conflicts in Syria, Iraq and Afghanistan.

solidarity – n. unity for a common cause

initiative – n. a new approach or plan for something

curriculum – n. lessons and subjects in a course of study

task force – n. a special group that works to complete a set objective

What do you think about Ukrainian children attending school in Germany? We want to hear from you. Write to us in the Comments Section.