Update Required To play the media you will need to either update your browser to a recent version or update your Flash plugin.
By Dan Friedell
12 March 2022


The University of California, Berkeley called the state's recent Supreme Court ruling "devastating news" for students who "have earned a seat" in the class for the upcoming school year.

The state's highest court chose not to look at a case first decided in the summer of 2021. That is when a lower court said the university must limit the number of students on its campus to about 42,000 for the 2022-2023 school year. Right now, about 45,000 students are at UC Berkeley.

UC Berkeley is one of the top public universities in the United States. The school said it received over 128,000 applications for the upcoming freshman class. 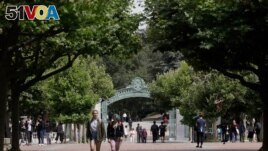 People walk in front of Sather Gate on the University of California at Berkeley campus in Berkeley, Calif., Thursday, July 18, 2019.

In order to meet the lower number, the university said it would bring in more students who live in California. As a result, international students and those from other American states would get fewer seats.

In addition, the university said it would ask some students to take classes from home early in the school year before coming to campus in 2023. Others will have to wait one year to start their college education if they still want to come to Berkeley. The university is also asking students to consider off-campus study programs in Sacramento, the state's capital, or Washington, D.C.

How did this happen?

The legal case was brought by a group of people who live in the city of Berkeley. They formed an organization called Save Berkeley's Neighborhoods, or SBN.

The group said the university had not been truthful about the number of students it meant to accept each year. It also said the school did not consider how its increasing enrollment would affect the surrounding neighborhoods.

UC Berkeley — like several California schools — does not have enough housing for its increasing enrollment.

The larger amount of students, SBN said, caused an increase in noise and waste. Because they could not live at school, they moved into the neighborhoods around the school, causing higher housing costs. As a result, SBN asked the local court to restrict the school's enrollment.

The situation in Berkeley is similar to other disputes between large California universities and their cities. The cities of Los Angeles, San Diego and Santa Barbara are also dealing with increasing numbers of students and universities that do not have enough housing.

In recent years, California state leaders have been working to help more students get into college. In 2021, they added $47 billion in education-related spending to increase the number of students going to public colleges.

Groups like SBN say the state has not required universities to build more housing while it has been pushing them to accept more students.

On the other side, universities like UC Berkeley say environmental restrictions in California make it difficult for them to build new housing for students.

Save Berkeley's Neighborhoods argued that UC Berkeley's failure to limit the number of students violates a state environmental law put in place in 1970. And the school said lengthy environmental reviews for new buildings have limited its attempts to build more housing for students. State lawmaker Scott Wiener said he would find a way to permit colleges to build student housing more easily.

When the California Supreme Court said it would not review the lower court's decision, SBN offered to work with UC Berkeley to permit 1,000 more students for the upcoming school year if most of them were from California.

The university declined the offer. A spokesperson told the local newspaper that decisions on the number of students are made by elected officials and school leaders and not by a "small group." The university also plans to appeal the decision later this year.

Jesse Livezey recently completed his advanced studies in physics at UC Berkeley. He said he does not believe there is a serious conflict between the university and the city. Everyone is concerned about the high cost of housing in northern California.

"It's a big problem in the Bay Area that goes way beyond UC Berkeley. I don't feel like we've hit some breaking point, or something is now unsustainable."

Livezey said that rejecting qualified students is not a way to solve the housing problem.

"I would love for those students to be able to come to Berkeley and I think that's what should happen," Livezey said.

Dan Friedell adapted this story for Learning English based on a report by the Associated Press and documents published by organizations and courts in the story.

Do you know about university housing problems where you live? Tell us about it in the Comments Section and visit 51VOA.COM.

campus – n. the area and buildings around a school or college

application – n. the formal written request for something such as a job or place at a school

unsustainable – n. not able to last or continue for a long time; not sustainable