Update Required To play the media you will need to either update your browser to a recent version or update your Flash plugin.
By Susan Shand
09 May, 2019

Pope Francis is requiring all Catholic clergy and religious workers to report clergy sex abuse and cover-up by their church high-ups to Vatican officials.

The move is part of a new effort to hold the Catholic leadership responsible for failing to protect the church's members.

The new church law provides protections for anyone making an accusation. It requires all Catholic dioceses around the world to create a system to receive the claims without identifying the name of the accuser. It also establishes the steps for an investigation when the accused is an important church official, such as a bishop or cardinal.

Francis is trying to find a way to answer the reports of clergy sex abuse and efforts by Catholic officials to cover-up the incidents. The accusations have badly damaged the church and Francis' leadership.

"People must know that bishops are at the service of the people," said Archbishop Charles Scicluna. "They are not above the law." Scicluna has represented the Vatican in sex abuse cases for many years. 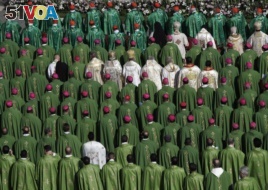 FILE - Bishops and cardinals attend a Mass officiated by Pope Francis at the opening of the Synod of Bishops, in St. Peter's Square of the Vatican, on October 3, 2018. (AP Photo / Alessandra Tarantino)

The law requires the world's 415,000 Catholic priests and 660,000 religious sisters to report when they learn or "believe" that a priest or nun has sexually abused a child. It also orders them to contact church officials if they know of sexual wrongdoing with an adult. And they are must tell officials if someone possesses child pornography, or if they have information about a cover-up.

The law does not require them to report accusations of sexual abuse to the police, as victims have demanded. The Vatican has always said that different legal systems in different countries make such a requirement impossible. They fear it could endanger the church in places where Catholics are an oppressed minority. But the Vatican law says that priests and nuns must obey legal requirements where they live.

The Catholic Church is preparing for many abuse and cover-up reports in the coming months. Catholic priests and nuns must now inform church officials of any information they have, even old cases of sexual wrongdoing and cover-ups.

In the past, clergy and religious workers could decide for themselves if they should inform a church official of suspected sexual abuse of a child. Now it is church law. While there is no punishment for the failure to inform, that priest or nun could be accused of a cover-up.

The law defines the crimes as: sexual activity with a vulnerable person or someone not yet considered an adult; sexual activity with an adult through violence or through abuse of power and anything having to do with child pornography. Cover-up is explained as acts "intended to interfere with or avoid" investigations.

Cardinal Marc Ouellet is the head of the Vatican's bishop office. He said the inclusion of sex crimes involving adults was clearly tied to cases of sexual abuse of nuns and seminary students by priests.

But Scicluna said it clearly covered anyone employed by the church, not only clergy.

In another legal first for the Vatican, Pope Francis ordered that victims of abuse must be welcomed, listened to and supported by the church. They must be offered spiritual, medical and emotional help.

Victims and their supporters have said that Catholic bishops and leaders who sexually abused children escaped justice. They also say religious superiors failed to protect their communities. Bishops and other high-level officials answer only to the pope. Few have been removed for sex abuse or cover-up, and usually only after terrible acts of sexual abuse became known to the public.

Last summer, former Cardinal Theodore McCarrick was thrown out of the church after a U.S. investigation found he had abused children. McCarrick had risen all the way to the position of cardinal, although the Vatican had received many accusations against him over the years.

diocese – n. the area that is controlled by a bishop in a Christian church

pornography – n. movies, pictures, magazines, etc., that show or describe naked people or sex in a very open and direct way in order to cause sexual excitement