Update Required To play the media you will need to either update your browser to a recent version or update your Flash plugin.
By Dan Friedell
31 January, 2016


The canals of Venice, Italy were packed with boats this week to launch a period of celebration leading up to Lent.

The city kicks off its Carnival with a boat parade. "Carnival" means "farewell to meat," and Carnival covers the days leading to a period of denial, called Lent. Some observant Christians will also fast during holy days in the Lenten period.

Those 40 days lead to Easter, the highest holy day for Christians. 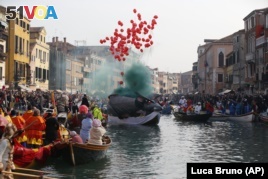 The Venice Carnival is one of the world's oldest and most colorful. It includes the boat parade in Venice's famous canals, a ball where people dress in beautiful costumes, and the king's banquet.

People from all over the world come to Venice's festival.

One woman came from England. She says the festival has a great atmosphere. "Great people, great food, getting to have a look around and see the great culture that's here as well."

The festival comes at the same time that many large European cities are on guard against terrorist attacks. But Carnival visitors say terrorist threats will not prevent them from enjoying themselves.

One Italian woman says she thinks a terrorist attack could come at any time, so she wants to live her life instead of being worried.

"We have decided to come anyway to take part in this festival because it really is the most beautiful."

People of all backgrounds celebrated life together. Slaves could wear masks and dine at the same tables as their masters.

Historians think those traditional festivals became the inspiration for Carnival when Christianity became a religion.

Zlatica Hoke wrote this story for VOANews. Dan Friedell adapted it for Learning English. Kathleen Struck was the editor.

Would you want to visit the Venice Carnival someday? Write to us in the Comments Section or on 51VOA.COM.

background - n. the part of a picture that is farthest from the person seeing it

banquet – n. a dinner held for many people, usually to celebrate a special event

carnival – n. a celebration held before Lent that includes music and dancing

fast - v. to eat no food for a period of time

kicks off - v. to start or begin

mask – n. a covering used to hide or disguise your face

master - n. someone with control over another person; the owner of a slave