Update Required To play the media you will need to either update your browser to a recent version or update your Flash plugin.
By John Russell
04 May 2021


The automobile division of Vietnam's largest business group, Vingroup, wants to get involved in the U.S. market.

The group hopes its VinFast cars will be enough to take car buyers away from market leaders like Tesla and General Motors.

VinFast is a recent arrival in automobile markets. It is ranked as the fifth biggest carmaker in Vietnam.

VinFast's chief is Nguyen Thi Van Anh. She told the Reuters news agency recently that the company plans to launch in North America and Europe in 2022. VinFast will join a large number of manufacturers seeking to compete with Tesla.

Even with such strong support, VinFast has difficult competition. Companies such as General Motors, Toyota and Volkswagen have spent tens of billions of dollars to develop electric and driverless vehicles.

The company was established in 2017 with a team led by former General Motors officials. VinFast is aiming to compete on vehicle size and price. It will offer an electric sports utility vehicle, or SUV, that Van Anh described as "more luxurious" than those currently available. 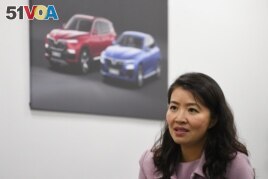 VinFast cars will also come with a battery leasing program. Buyers will pay a monthly amount that is close to what the average car buyer might spend on gasoline.

That means the cost of the battery, one of the most expensive parts of an electric car, will not be included in the sales price.

The battery uses cells from South Korea's Samsung SDI. When it is at 70 percent of its full lifespan, VinFast will replace it, Van Anh said. VinFast hopes the ideas will win over American customers.

Many Asian carmakers have entered the U.S. market with success. Toyota in the 1970s and Hyundai in the 1980s overcame concerns about their products to gain market share from U.S. manufacturers.

VinFast, which has yet to make a profit, faces strong competition.

Bill Russo is head of Automobility Ltd and a former Chrysler official. Russo said VinFast's biggest barrier is persuading "consumers that they have a solid product" and that VinFast cars give good value for the money.

Russo added, "The product itself looks to have the right appearance and features, but this will only get you in the game. Winning requires a technology or business model edge over the competition."

Dunne said no electric vehicle maker can compete with Tesla in the near future.

But Dunne added, "...the good news is that companies like VinFast do not have to beat Tesla to win." He said that the company only needs to get some car buyers who bought gasoline-powered cars to change over to electric cars.

VinFast has hired Jeremy Snyder to help them grow. He worked for Tesla for ten years.

Snyder told Reuters he was VinFast's first employee in the United States. Between full-time employees and temporary workers, the company now has about 100 workers in the U.S.

"It's very exciting to bring Vietnam and the United States closer through VinFast," he said.

battery – n. a device that is placed inside a machine (such as a clock, toy, or car) to supply it with electrical power

customer – n. a person who buys good and services

feature – n. an interesting or important part, quality or ability