What Does the Future Hold for Liberal Arts Graduates?

Update Required To play the media you will need to either update your browser to a recent version or update your Flash plugin.
By Pete Musto
05 January, 2019


Since their earliest days, American colleges and universities have based their study programs around what is known as the liberal arts.

This is meant to give students a wider understanding of their world by showing them how different fields are connected. And it improves students' critical thinking skills by helping them look at problems in many different ways.

However, in recent years, many Americans have avoided liberal arts degree programs. Parents and educators have pushed students towards fields directly related to a specific career. This includes fields in business, healthcare, science, technology, engineering and mathematics, also known as STEM fields.

That is mainly due to the belief that students who graduate with business or STEM degrees are more likely to find well-paying jobs. But a new study suggests that liberal arts graduates are just as desirable to employers in the modern labor market. 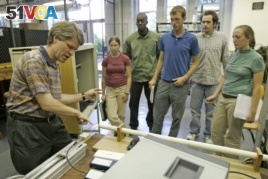 What the future holds for liberal arts graduates

Last November, the labor market research company Emsi and the Strada Network education research group released a report on the skills for the workplace of the future.

Researchers looked at the employment histories of over 100 million Americans, gathered from social media and professional development websites. They also examined more than 36 million job advertisements on employment websites.

The report showed that 82 percent of liberal arts degree-holders from four-year programs are employed. Those who are employed full-time made about $20,000 more per year than people with no higher education at all. And liberal arts degree holders with advanced degrees earned an additional $20,000, on average.

Rob Sentz works with Emsi and helped write the report. He argues that the findings show there are plenty of well-paying jobs for liberal arts graduates. And that is because of the special skills which students learn from liberal arts programs.

He says that a company may hire an engineering student immediately after college to work on a specific project, like designing a new kind of robot. But very often, engineering programs fail to teach students how to work well with others or communicate complex ideas in a simple way.

Sentz says those are exactly the types of skills that are taught in a liberal arts education. The report found that employers asked for skills like leadership and communication in nearly 20 percent of all the job advertisements it examined.

The issue of uneven earnings

Nicole Smith is the chief economist for the Georgetown University Center on Education and the Workforce in Washington, D.C. She notes the report itself shows liberal arts graduates never really reach the same earnings levels as STEM graduates, even as far as 10 years into their careers.

She argues that the required skills listed in job advertisements are not the best measure of what employers are seeking. That is because in the modern job market, many employers ask for more than they actually want or need when filling positions.

But Smith agrees that there is a place for liberal arts degree holders entering the job market today. She says much of the move away from liberal arts has come from the rise of artificial intelligence. Many people fear for the future of their careers as machines continue to fill more complex positions that humans once held.

Smith says the companies producing these intelligent machines need help teaching them how to think more like and interact with human beings. They need help selling products, solving problems and communicating with the public. These are skills that come from a liberal arts education.

Sentz and Smith agree that the biggest challenge facing liberal arts graduates is demonstrating to employers what their skills are and the value they represent. And colleges and universities need to do more to teach their students how to do so.

Pete Musto reported this story for VOA Learning English. Hai Do was the editor. We want to hear from you. How successful do you think liberal arts graduates will be in the job market of the future? Write to us in the Comments Section or on 51VOA.COM.

advanced – adj. beyond the basic level

hire – v. to give work or a job to someone in exchange for wages or a salary

excel – v. to be better than others

across-the-board – adj. affecting everyone or everything in a group