Update Required To play the media you will need to either update your browser to a recent version or update your Flash plugin.
By Anna Matteo
22 November, 2014

One such example is the word matter. As a matter of fact, matter can mean just about anything. When talking about science, matter is the material or substance that things are made of. 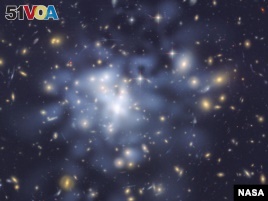 NASA Hubble Space Telescope image shows the distribution of dark matter in the center of the giant galaxy cluster Abell 1689, containing about 1,000 galaxies and trillions of stars. (File Photo)

In fact, matter could be one of the most useful words in the English language. But that is just a matter of opinion. Actually, it is more than that. Matter is one of those words that matter a lot.

Let us take a minute and really get to the heart of the matter – in other words, let's get to the most important part. Or it could be what we call a matter of principle.

Let's say someone claims that you owe them $50. But you don't. A friend might say, "Well, you could pay him the $50. It's not that much money. Then you won't have to hear him complain anymore. But if you do not owe him the money, do not pay him the money. It's a matter of principle."

Your friend raises a good point. It's not the amount of money that is important. It's a matter of principle.

Now, let us get back to two more scientific meanings of matter. Scientists say that dark matter makes up most of our universe. And when people talk about gray matter, they are talking about the brain.

Be Careful How You Ask, "What's The Matter With You?"

There is another way to use the word matter. But be careful with your choice of words.

But saying, "What's the matter with you?" has a completely different meaning. And it usually sounds rude or offensive.

In fact, when you say, "What's the matter with you?" you are not really asking what is wrong with the person. You are suggesting that the individual did something wrong or stupid. So be careful with that one!

Another expression that could sound rude is to say, "It doesn't matter to me." Here, it depends on the context, or situation, and how you say it.

Here are two examples. Let's say you tell someone that a friend just got a big raise at work and will be making a lot more money. That person answers with, "It doesn't matter to me." Here, it means he or she does not care. And it sounds rude.

But saying, "Oh, you pick where we eat dinner. It doesn't matter to me." does not sound rude or offensive.

In this context and tone of voice, "it doesn't matter" shows you are easy-going and are willing to do what the other person wants.

Now, it is time to take matters into your own hands. Try using these expressions with the word matter.

It's only a matter of time before you will become an expert on the use of matter. And as for this program ... this matter is closed.

You can find more Words and Their Stories on our website, 51voa.com. I'm Jonathan Evans.

Go to our website and practice using these matter expressions in the comment section. Or simply practice by saying what matters most to you.

This Words and Their Stories was written by Anna Matteo and edited by George Grow. The song used at the end of this program is "Matter of Trust" by Billy Joel.