You Don't Have to Be a Rocket Scientist to Read This

Update Required To play the media you will need to either update your browser to a recent version or update your Flash plugin.
By Jeri Watson
25 October, 2014

I'm Phil Murray with Words and Their Stories, a program in Special English.

"You do not need to be a rocket scientist." Americans hear these words often. People say them in schools, offices and factories. Broadcasters on radio and television use them.

This is how you might hear the words used.

Workers in an office are afraid to try to use their new computer system. Their employer tells them not to be foolish: "You do not need to be a rocket scientist to learn this," he says. 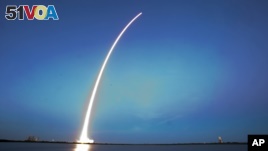 A Falcon 9 SpaceX rocket lifts off from Launch Complex 40 at the Cape Canaveral Air Force Station in Cape Canaveral, Fla., Dec. 3, 2013. (AP Photo/John Raoux)
Or, high school students cannot seem to understand something their teacher is explaining. "Come on," she says. "You do not need to be a rocket scientist to understand this."

Or, a company that makes soap is trying to sell its product on television. "You do not need to be a rocket scientist to see that our soap cleans better," the company says.

These words send a strong message. They say that you do not need to be extremely intelligent to understand something.

How did the expression begin?

No one seems to know for sure. But an official of the American space agency -- NASA -- says the expression just grew. It grew, he says, because rocket scientists probably are the most intelligent people around.

Not everyone would agree.

Some people might be considered more intelligent than rocket scientists. For example, a person who speaks and reads 15 languages, or a medical doctor who operates on the brain.

Still, many people would agree that there is something special about scientists who build rockets. Maybe it has to do with the mystery of space travel.

Moving pictures from before World War II showed a man named Buck Rogers landing on the planet Mars. He was a hero who could defeat any enemy from outer space.

The rocket scientist is a different kind of hero. He or she makes space travel possible.

Rocket scientists, however, can have problems just like anyone else.

A Washington rocket scientist tells about a launch that was postponed many, many times. Finally, everything seemed right. Mechanical failures had been repaired. The weather was good.

The scientists had planned that part of the rocket would fall into the ocean after the launch. All ships and boats within many kilometers of the danger area had been warned. But in the last few seconds a small boat entered the area. Once again, the launch was postponed.

This program, Words and Their Stories, was written by Jeri Watson.