Update Required To play the media you will need to either update your browser to a recent version or update your Flash plugin.
By Ashley Thompson
01 February, 2018

February 1 marks the beginning of Black History Month in the United States and other countries around the world.

On Thursday, Google honored the month with a special Google Doodle of African-American historian Carter G. Woodson. Experts call him the "Father of Black History."

Woodson was born in the state of Virginia in 1875. His parents were both former slaves. Neither of his parents ever had the chance to learn to read or write. Woodson, however, had a strong interest in education. Because he spent much of his youth helping his family by working in farming and mining, Woodson mostly taught himself.

Woodson entered high school at the age of 20 and received his diploma in just two years.

He went on to become the second African-American in history to earn a doctorate from Harvard University. He was among the earliest scholars of black history. 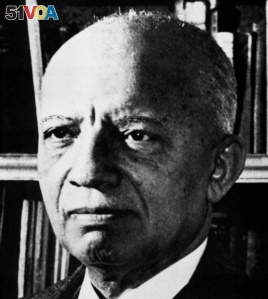 Woodson launched a publication called the Journal of Negro History. It was later renamed the Journal of African American History. In it, he and other experts wrote about African-American life and history. He also wrote more than 12 books on the topic during his lifetime.

In 1926, Woodson developed an education program on the study of African-American history. The one-week program was called Negro History Week. It took place in February. Woodson chose February because it was the birth month of abolitionist Frederick Douglass and President Abraham Lincoln.

That weeklong program later expanded to become what is known today as Black History Month.

The Google Doodle shows Woodson sitting at a desk and writing, with other African-American leaders by his side.

Sherice Torres is Google's director of brand marketing and a member of Black Googlers Network. She wrote about Woodson and the story behind the doodle. She said that Woodson's life story inspired her to choose African American Studies as her major in college.

Ashley Thompson wrote this story for Learning English based on information from Google. Hai Do was the editor.

diploma - n. a document which shows that a person has finished a course of study or has graduated from a school

doctorate - n. the highest degree that is given by a university