Update Required To play the media you will need to either update your browser to a recent version or update your Flash plugin.
By Anna Matteo
11 February, 2015


The World Health Organization has appointed a new regional director for Africa. For the first time, the director is a woman.

Matshidiso Moeti promises to shake up the office, or make changes for the better. She says she plans to make the regional office more effective in dealing with traditional and new diseases. 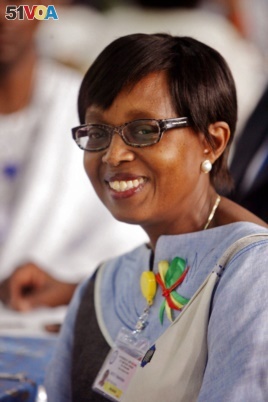 Dr. Moeti has more than 35 years of national and international experience in the field of health. She says she sees her appointment with a mix of pleasure and purpose. But she also says that appointing a woman to this position is long overdue, meaning it should have happened sooner.

"I am very happy and proud to be the first woman. But, I also agree that it was ... it was overdue in a sense. And yes, I am very excited and I am looking forward to the opportunity. I do recognize that the challenges are great and that they would have been considerable even if we hadn't had this Ebola outbreak, which has turned out to be such a tragedy in West Africa."

?As Ebola cases and deaths in West Africa increased, so did criticism of the slow reaction of WHO's Africa office. The office was held partly responsible for the fast spread of Ebola.

The WHO describes Dr. Moeti as someone who does not back away from difficult problems. But even she says that the job ahead of her is huge.

Dr. Moeti says it is very important to help Liberia, Sierra Leone and Guinea. These countries will require continued support as they recover from the Ebola epidemic. She says they need to strengthen their preparedness systems to deal with similar emergencies in the future.

Dr. Moeti says one of her main goals is to speed reforms in Africa. She says much has been learned from the failures and successes connected with the Ebola outbreak.

So, she plans to first re-structure the size of the response teams and their skills. She says they must be able to react quickly.

Dr. Moeti joined WHO's Africa Regional Office in 1999. She has had many different jobs, including deputy regional director. She will lead a team of 2,400 employees in the 47-country Africa region.

Dr. Moeti says she considers herself to be a firm but fair leader. She says she supports an open environment where her employees are able to be creative. But, Dr. Moeti adds she expects people to provide results and have answers for their actions.

The Africa Regional Office is in Brazzaville, capital of the Republic of the Congo. Dr. Moeti says she will leave for the city soon.

Do you think appointing a female to this position is long overdue? Let us know in the comments section.

Lisa Schlein reported for VOA from WHO headquarters in Geneva. Anna Matteo wrote it for Learning English. Caty Weaver was the editor.

shake up – v. to make important changes or series of changes in the way a company or other organization is organized or run. Shake-up as a noun is hyphenated.

overdue – adj. something that should have happened or been done before now

challenge – n. a difficult task or problem: something that is hard to do