Update Required To play the media you will need to either update your browser to a recent version or update your Flash plugin.
By Anna Matteo
02 July, 2016


Now the VOA Learning English program Words and Their Stories!

The fourth of July is Independence Day in the United States. On that day, we celebrate the decision by early American leaders to declare independence from Britain.

While people in both England and the U.S. speak English, the two types of English can be very different.

First, there are differences in spelling. The British like the letter "u" and have kept it in many words. Americans have dropped it. Somewhere in our language history, we decided that "labor," "color" and "favorite" were just fine without the "u" next to the "o."

But our differences go beyond spelling. Sometimes, we use different words entirely.

Here, we live in apartments with elevators. Over there, they live in flats with lifts. 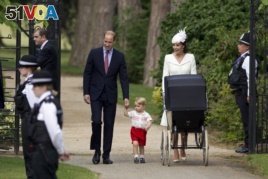 Kate the Duchess of Cambridge pushes daughter Princess Charlotte in a pram. Not a stroller. England, July 2015.

We put diapers on our babies and push them in strollers. The British love their babies just as much as we do, but they use nappies and prams instead.

We power our cars with gas. They use petrol.

And, if we need to look in our car's dark trunk for something, we use a flashlight. They would use a torch to search their dark boot.

Then there are idioms. Some British and American idioms have the same meaning, but use different words. For example, in the U.S. if you want to add your opinion to a conversation, you put in your two cents. In the U.K., they put in their tuppence (or two pence) worth. Makes sense. They have pence and we don't.

Another example is the idiom about discussing the same issue again and again, especially if it cannot be resolved.

We say, "Don't beat a dead horse!" The British, on the other hand, advise against flogging one. And, if you are keeping secrets in the United States, you have skeletons in the closet. In Great Britain, your skeletons would be hiding in a cupboard.

But the real fun begins when we start exploring idioms and expressions that are unique to each country.

Let's start with "Bob's your uncle." To an American ear, that is a weird expression. And it has nothing to do with any relative you may or may not have named Bob. It is just a way to finish a set of simple instructions.

What is the equivalent -- the different but equal saying -- in the U.S.? Americans might say, "and there you have it!" Or sometimes, more dramatic people will say, "Ta-da!" For example, imagine you are explaining to someone how to use your new fancy, coffee maker.

You explain: "First, you grind the beans. Then you put them in the side container and pour water in the main container. Push the button and ten minutes later -- ta-da! -- you have a pot of coffee!

Sometimes over a fresh pot of coffee, you may want to have a long talk with a friend. You might even throw in a little gossip. We call that a chat, or if it's a short conversation, chit-chat. The British would call it a "chin-wag."

If a British person says, "I've got the hump," we might think they are sick and need to see a doctor. But in fact, when Brits say they have a hump, it means they are mildly annoyed or upset. In the U.S., some informal ways to say we are upset are "I'm ticked off" or "I'm miffed."

Now, when Americans are really surprised by something, we can say we "are at a loss for words." Or more informally, we simply say we are "shocked" or "blown away."

Across the Atlantic in the U.K., they are "gobsmacked." In the U.S., we don't get smacked by gobs. Ever.

Finally, a familiar word used by both countries but in different ways is "cheers." We use the word over drinks when we are wishing someone good health or congratulating an accomplishment. The British use "cheers" to mean "thank you." For that, we Americans say, "Thank you!"

Now, we don't expect you to pick sides. Both American and British English have their strong points. But thanks for listening to Words and Their Stories, a program that teaches American English.

Cheers! I mean, thanks.

apartment – n. a usually rented room or set of rooms that is part of a building and is used as a place to live (British = flat)

elevator – n. a machine used for carrying people and things to different levels in a building (British = lift)

diaper – n. a piece of cloth or other material that is placed between a baby's legs and fastened around the waist to hold body waste (British = nappies)

stroller – n. a small carriage with four wheels that a baby or small child can ride in while someone pushes it (British = prams)

trunk – n. the enclosed space in the rear of an automobile for carrying articles (British = boot)

flashlight – n. a small electric light that can be carried in your hand and that runs on batteries (British = torch)

flog – v. to beat or whip (someone) severely

smack – v. to strike so as to produce a smack

skeleton – n. the structure of bones that supports the body of a person or animal

closet – n. a usually small room that is used for storing things (such as clothing, towels, or dishes) (British = cupboard)

grind – v. to crush or break (something) into very small pieces by rubbing it against a rough surface or using a special machine

gossip – n. information about the behavior and personal lives of other people