Let's Get Down to the Nitty-Gritty!

Update Required To play the media you will need to either update your browser to a recent version or update your Flash plugin.
By Anna Matteo
09 January, 2016

This is a program about the history of words and how we use them in conversation. Today we talk about the noun nitty-gritty.

Nitty-gritty is one of many rhyming compounds in the English language. 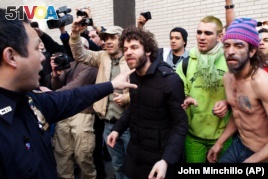 As with many rhyming compounds, nitty-gritty is informal. It is often used in casual conversation. It is a useful word that serves many purposes. When using it in a sentence, we often say "to get down to the nitty-gritty."

One meaning of nitty-gritty is the most important part or basic truth of any situation or subject. But, if you are not a fan of rhyming compounds or if you need to use a more formal word, you can use many other English expressions.

The nitty-gritty can also mean the bottom line or reality of a situation, as in this example:

The ideas behind planning a city are so interesting. I could talk about it all day!

I agree. But the city council needs to get down to the nitty-gritty. Washington, D.C. needs more apartments close to the Metro for young professionals moving here.

The nitty-gritty can also mean the practical details that need to be finished. Used in this way, you can also say the nuts-and-bolts of a task or situation.

We have talked about our vacation plans all week. Enough talk!

You're right. Now, let's get down to the nitty-gritty of booking flights and hotel rooms.

Nitty-gritty can also be used as an adjective. You can say someone is good at dealing with the nitty-gritty details of a problem.

In his song, "Jungle Gym," Jack Johnson sings about New York City being nitty-gritty. This song is from the 2006 movie Curious George.

As with many words, the origin of nitty-gritty is unclear. Even though it is commonly used, some word experts have debated about the political correctness of "nitty-gritty."

Some word historians say that nitty-gritty refers to the debris – or remains -- left on the floor of slave ships. This reference may make the word offensive to some people.

However, there is no written proof that nitty-gritty originated on the floors of slave ships. Many word historians say that the claim is an example of a mythical word origin trying to become fact.

British word experts have also researched the origins of "nitty gritty." Word historians on the British website The Phrase Finder say that nitty-gritty first appeared in 1937 as a musical composition. The song ‘That Nitty Gritty Dance' was copyrighted by Arthur Harrington Gibbs.

But no one really knows for sure. What we do know is that these dates place the origin of the word long after slave ships and slavery in America.

We also know singer Shirley Ellis recorded "The Nitty Gritty" in 1963. It was a popular song and dance.

Let's listen to Shirley and get right down the real nitty-gritty.

Practice using nitty-gritty in the Comments sections. Or get to the heart of the matter by using words like "crux" or "core."

Here is Shirley Ellis in 1964 performing her 1963 hit song "The Nitty Gritty" on the television show American Bandstand and her interview with host Dick Clark.

And here are some dancers on a television show from the 1960s dancing to "The Nitty Gritty." Check out the male dancer in front who really "gets into it!"

essence - n. the basic nature of a thing : the quality or qualities that make a thing what it is

crux - n. a main or central feature (as of an argument)

mythical - adj. based on or described in a myth : existing only in the imagination