Younger Americans Leaving Cities for Low-cost Homes in Other Places

Update Required To play the media you will need to either update your browser to a recent version or update your Flash plugin.
By John Russell
15 February 2021


Young Americans without a lot of money are increasingly moving to parts of the country where the cost of living is low.

The change is especially clear among people born in the 1980s and 1990s – the "millennial" generation. Also, many of these young people are buying old houses because they are less costly.

Kate Reinhart is from the state of Utah. She long dreamed of living in a large Victorian house. Such houses were popular in the 1800s and are known for their unusual design details. She remembers seeing one in the popular television show the Addams Family. 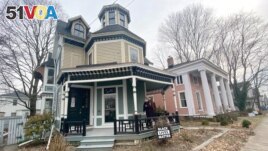 Kate and Cameron Reinhart stand on the porch of their 1880's Octagon house they are renovating during the coronavirus pandemic, in Norwich, eastern Connecticut, U.S., January 14, 2021. (REUTERS/Dan Fastenberg)

Her husband Cameron found his first job near Norwich, Connecticut. It is a town with one of the largest numbers of 18th- and early 19th-century houses in the New England area.

Housing prices are very different between states in the U.S. Reinhart's buying price is well below the price of most houses in Connecticut. In a 2020 estimate, the website Business Insider suggests that the median home value in Connecticut is around $250,000.

Reinhart said she and her husband value their home more during the coronavirus health crisis because they "have more space."

She added that people are worried about living close to each other in small apartment buildings. Many people from New York City, she added, "are fleeing to here."

The change seems clear on CheapOldHouses, a website created in 2016 by Elizabeth Finkelstein. The website's goal is to increase the sales and preservation of historic houses.

Followers of the site's Instagram page have increased every week since the coronavirus health crisis began in March. It now has about 20,000 followers, Finkelstein said. About 42 percent are aged 25 to 34 years old. About 75 percent are women.

"We are living in a time," Finkelstein said, "when people are willing to kind of take risks, maybe risks that they've been wanting to take their whole life."

She added that an important idea in property sales has always been "location, location, location." In other words, where a house is is the most important thing for people to consider when buying their home. But now, she said, "for the first time that's being flipped a little bit on its head."

Flipped on its head is an expression that means to turn upside down.

Many of the homes on CheapOldHouses.com are in the Midwestern and Southern states. In those areas, many houses sell for less than $100,000.

"We feature homes people can realistically buy, but also use their hands on as opposed to sitting in a cubicle all day long," she said.

Many people have moved away from some American cities after the beginning of the coronavirus crisis. It is estimated that 70,000 people left the New York City area in 2020. The moves resulted in an estimated loss for the city of $34 billion. That number comes from Unacast, an information research company.

More millennials may leave big cities even after the pandemic is over, Finkelstein said.

"With so many offices going remote, people have more opportunity to just say, ‘maybe I don't need to be paying more than half my income in rent. And I can, I can take that leap.'"

median – n. mathematics : the middle value in a series of values arranged from smallest to largest

preservation – n. the act of keeping something safe from harm or loss

cubicle – n. chiefly US : a work space in a large office with a desk that is usually surrounded by low walls

leap – n. a great and sudden change, increase, or improvement; a serious attempt to do or understand something new