Update Required To play the media you will need to either update your browser to a recent version or update your Flash plugin.
Joe DeCapua
June 02,2015


A new report on Africa’s food security showed regional differences in progress. Western Africa led the continent in reducing the number of undernourished people since the early 1990s. The U.N. Food and Agriculture Organization has released the first edition of the Regional Overview of Food Insecurity in Africa.

The findings may seem contradictory at first. For example, the prevalence of undernourished people in sub-Saharan Africa declined from 33 percent in the early 1990s to 23 percent today. So, in this case, prevalence is the percentage of Africa’s growing population affected by undernourishment. That’s gone down and that’s good. 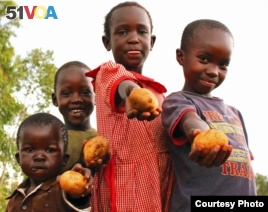 The FAO has released the first edition of its regional Overview of Food Insecurity in Africa. West Africa leads continent in progress. (Credit: FAO)

However, the FAO report also showed that despite a smaller percentage of the overall population being undernourished, the actual number of undernourished people has increased. It’s risen from nearly 176 million in the early 1990s to 220 million today.

“There is a lot of improvement. Heads of state of all the African countries have made a very concrete resolve in the declaration in Malabo, Equatorial Guinea,” he said.

The long-titled Malabo Declaration on Accelerated Agricultural Growth and Transformation for Shared Prosperity and Improved Livelihoods was approved a year ago.

Tijani said, “Before that time there had been high level meetings and there were agreements to get a roadmap going back to the Maputo Declaration of 2003. Governments will make sure they focus more, in terms of policy, in terms of more investments.”

The 2003 Maputo Declaration called on African governments to invest 10 percent of their national budgets in agriculture.

The FAO’s Regional Overview of Food Insecurity said Angola, Djibouti, Cameroon, Gabon, Ghana, Mali and Sao Tome and Principe “met the relevant Millennium Development Goal of halving the proportion of the population suffering from undernourishment and the World Food Summit target of halving the absolute numbers of the hungry.”

It said that West Africa made “particular strides.” Tijani said the region “reduced the ranks of the hungry by almost 11 million.” He described that as “significant progress despite rapid population growth and recurrent droughts in Sahel countries.”

The FAO report said Eastern and Southern Africa “made some progress,” while Middle Africa is “lagging behind” regarding both the MDG and World Food Summit targets.

Tijani highlighted some of the current obstacles to African food security.

“The effect of climate change, civil strife, epidemics like Ebola and others – and also some insecurities --these are part of those phenomena and things that are making food security very difficult.”

The findings also showed Africa’s poverty rate declined by 23 percent between 1993 and 2011.

As for children, the number of underweight children has declined in sub-Saharan Africa over the last 20 years, but there’s a growing number of children under five who are overweight.

Health officials said the dual problems of undernourishment and obesity both can be blamed on poor nutrition, such as high calorie but low nutrient foods. Too much sugar and fat have been blamed in many cases.