Update Required To play the media you will need to either update your browser to a recent version or update your Flash plugin.
By Henry Ridgwell
Dec 2, 2016
LONDON —

As Syrian government forces continue to push deeper into the rebel stronghold of eastern Aleppo, analysts say the wider geopolitical ramifications are being felt across the West. In Europe, demands for the removal of Syrian President Bashar al-Assad could be tempered by a desire to avoid another refugee crisis.

“Assad's winning. And I think it's pretty safe to say that he will be there at the endgame," said Michael Stephens at the Royal United Services Institute in London. "And whoever negotiates a peace deal in Syria will have to negotiate with Bashar al-Assad.” 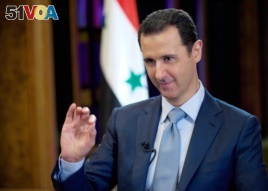 Europe and the United States have backed moderate opposition forces. But the desire to end the bloodshed could trump those alliances.

“How that end is reached, to be perfectly honest, is becoming less important than reaching it,” said Stephens.

Europe is hosting around one million Syrian refugees. The battle for Aleppo has forced tens of thousands more to flee. Human rights groups say Europe must respond.

“The people of Europe are prepared to receive refugees," said John Dalhuisen of Amnesty International in London. "They want to be reassured that this will be done in a structured, organized way, that there are reception conditions waiting for them in their countries, that there won't be social difficulties internally.”

But Europe is struggling to cope with the migrant influx – and that could force a policy divergence between Brussels and Washington.

“The number one priority for the Europeans is to stop a new wave of refugees coming into continental Europe," said Michael Stephens of the Royal United Services Institute in London. "That brings Turkey into the game, and so there has to be a relationship with Turkey. Which then brings the Kurdish issue into the game. And if we see at the moment, current operations against the Islamic State still heavily favor the Kurds in Syria as the preferred choice. But that seems to be an American-led initiative, Europeans are far more cautious about it.”

For Europe, the war in Syria no longer has the strategic importance it once did, says Stephens.

“All the different outside factions and the proxy groups continued that war, turning it into a stalemate which has destabilized almost the entire region, and also southern Europe, and driven the rise of far-right movements in Europe as well," Stephens said. "There are far, far larger issues at stake and unfortunately those people losing out are the Syrian civilians in eastern Aleppo.”

Ending the war may come with the price of keeping Bashar al-Assad in power. Even then, analysts say, Syria's future stability is far from guaranteed.