Update Required To play the media you will need to either update your browser to a recent version or update your Flash plugin.
Mike O'Sullivan
July 23,2015


PASADENA, CALIFORNIA— Cities and towns in Southern California are greeting thousands of athletes who are arriving for Special Olympics, a competition for people with intellectual disabilities. The games will run from July 25 through August 2.

Athletes from Namibia, Singapore and Tanzania got a rousing welcome from local residents in Pasadena, California. 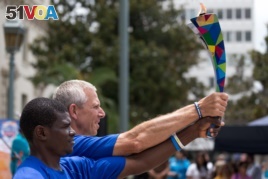 The team doctor of the Tanzanian delegation is happy to be here.

“Because we had a very long journey, about 50 hours traveling, but the great hospitality of the people of Los Angeles since we arrived – we've had full attention, good accommodation, good meals, and good cheers from everybody," said Mwankemwa.

6,500 athletes have gotten greetings like this around Southern California .

“Oh, it's really, really amazing. It's my first time here. The atmosphere is just great and the people are lovely. The reception has been overwhelming," said Matias.

This is the first international travel for many of these athletes, who are here to make friends, as well as compete. The Namibian coach says he and the athletes are enjoying themselves after long months of practice.

“They have really good experience. Now is the time when they have to display all the hard work they’ve put in for the whole year," he said.

Runners have brought the Special Olympics torch, called the Flame of Hope, to this and other sites around Los Angeles, traveling through 35 countries and all 50 US states in a fund-raising effort for Special Olympics by local police agencies.