Update Required To play the media you will need to either update your browser to a recent version or update your Flash plugin.
By VOA
Jul 8, 2018


The United States is set to apply maximum economic and diplomatic pressure on Iran to induce Iran's leaders to change their destabilizing policies, including their support for terrorism, missile proliferation, and impoverishment of the Iranian people. 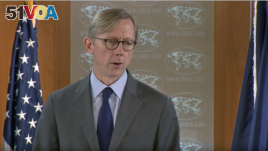 U.S. State Department Director of Policy Planning Brian Hook told reporters that the U.S. goal in relation to energy sanctions is “to increase pressure on the Iranian regime by reducing to zero its revenue from crude oil sales.” The U.S., he added, is working to minimize disruptions to the global market, “but we are confident that there is sufficient global spare oil production capacity.”

Director Hook pointed out that U.S. sanctions “do not now, nor have they ever, targeted humanitarian goods;”

“Our sanctions pressure the Iranian regime into changing its behavior, and they do not target the Iranian people. The United States does not sanction the export of food or medicine to Iran.”

In addition to applying economic pressure, another priority for the U.S. is standing in solidarity with the Iranian people, “the longest-suffering victims of the regime”:

“The average Iranian today is struggling to afford basics like water, bread and eggs. At the same time, the Iranian regime is squandering millions of dollars on violent misadventures abroad. These serve no purpose other than to prolong pain and suffering of men, women and children in Iran and elsewhere in the Middle East.”

Mr. Hook pointed out that since the United States withdrew from the Iran deal in May, the U.S. has sanctioned 53 individuals and entities for human rights abuses, proliferation activities or acts of terrorism, including Sadeq Larijani, head of the judiciary. That designation demonstrates, he said, the United States will target those responsible for human rights abuses at the highest level of the Iranian government.

As the nationwide protests in Iran confirm, the Iranian people are rightly frustrated with the regime, Director Hook said; and the United States stands with them: “A people with as rich a history and as deep a culture as the Iranian people deserve a government that treats them with dignity.”