A Damning Report on Assad's Use of Chemical Weapons

Update Required To play the media you will need to either update your browser to a recent version or update your Flash plugin.
By VOA
Sep 12, 2017


The United Nations reports that despite reduced violence in some areas of Syria, unspeakable crimes against civilians have continued, including the use of chemical weapons against the Syrian people by the Assad regime.

The UN's International Commission of Inquiry for Syria, led by Paulo Sergio Pinheiro, confirmed that Syrian government forces used chemical weapons more than two dozen times since the conflict began, including in the deadly sarin gas attack in April, 2017 on the town of Khan Sheikhoun that killed at least 83 people. 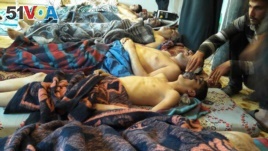 Victims of the chemical weapons attack lie on the ground in Khan Sheikhoun, in the northern province of Idlib, Syria, April 4, 2017.

“Government forces continued the pattern of using chemical weapons against civilians in opposition-held areas,” the report by the Commission stated. “In the gravest incident, the Syrian air force used sarin in Khan Sheikhoun, Idlib, killing dozens, the majority of whom were women and children.”

The report notes that Assad's aerial campaign also targeted medical facilities throughout the area, resulting in a severe weakening of their ability to provide assistance to victims of the sarin attack and a consequent increase in the number of civilian casualties.

In addition, the Commission reported that at in least three places -- Idlib, Hamah, and eastern Ghouta, a suburb of Damascus -- Syrian forces used weaponized chlorine. These attacks constitute clear violations of international humanitarian law and the Convention on Chemical Weapons, the report noted, which the Syrian Arab Republic ratified in 2013 following a previous sarin attack.

After the report was released, the U.S. mission to the United Nations called for “full accountability for chemical weapons use” in Syria.

The United States has long urged the international community to act to enforce UN Security Council resolutions against the use of chemical weapons, and to hold perpetrators like Bashar al Assad responsible for his crimes. In April after the attack on Khan Sheikhoun, the United States destroyed the airfield in Syria from which the Syrian government's chemical strike was launched. The same month, the U.S. Treasury Department imposed sanctions against 271 employees of the Syrian government agency responsible for developing such weapons and the means to deliver them.

As the evidence continues to mount of Assad's culpability, it is past time for the international community to ensure that such blatant disregard of international law and human decency stop and that the perpetrators be held to account.