Update Required To play the media you will need to either update your browser to a recent version or update your Flash plugin.
Kane Farabaugh
May 06,2016

Many who are eligible to vote sit on the sidelines. The members of one organization want to remove some barriers they say are in the way of getting Asian-Americans to vote, hoping to reverse low voter turnout.

Burmese refugee Ma Zin settled in the town of Ft. Wayne, Indiana, in 2004, after years fleeing from Myanmar’s oppressive ruling military junta. Twelve years later she’s still working on her English skills, though that hasn’t stopped her from becoming a U.S. citizen, a responsibility she cherishes. 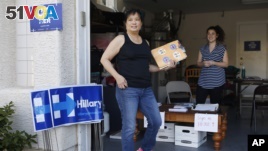 Cynthia Ameli, center, a Chinese-American, picks up materials from Sarah Gibson before heading out to canvass for presidential candidate Hillary Clinton in Las Vegas, Feb. 12, 2016.

“Because we’ve become a citizen of America, it is important that we select a president, because as a citizen we would like to know what a president can do for us,” she said.

The 2016 U.S. presidential election is Ma Zin’s first experience participating in a democratic process to choose a leader, a path she is on at the same time democratic reforms are taking hold in her home country of Myanmar.

“Hillary Clinton and Daw Aung San Suu Kyi both have a relationship for changing and bringing Burma’s democratization. That is one of the reasons why I would like to see Hillary become president,” said Ma Zin.

While she waits to cast her first ballot, this isn’t her first opportunity to participate in a U.S. election. Although eligible since 2008, she did not register to vote in the last two presidential elections, overwhelmed by the language barrier and the process.

“There’s not enough information out there that people don’t know how to navigate that system,” said Kristina Tendilla, who is a community organizer for Asian-Americans Advancing Justice, a non-profit group committed to empowering Asian-Americans.

She says one way to help new potential voters, particularly in the neighboring state of Illinois, is automatic voter registration when a person applies for a drivers license or ID card.

Tendilla is calling for a system that would automatically register people who are eligible to vote when they interact with the state, or the Department of Motor Vehicles.

“In the last 10 years our communities have gone up more than 40 percent and have reached numbers that can increasingly the outcome of not just national, but local elections, too.” said Tendilla. “These elections could be won on 100 or 200 votes, which is really incredible and an opportunity for our community to make a difference.”

Meanwhile, Ma Zin still needs to register to vote for this year’s election in November. In the large Burmese community in Fort Wayne where she lives, there is widespread support for Burmese leader Aung San Suu Kyi. Zin is proud that a woman has such a prominent leadership role in her home country, and wants to be a part of such a moment in her new country.

“We are so proud of it. Now America will hopefully have a woman president,” she said.

Hillary Clinton is on track to make history as the first female presidential candidate of a major party, and if voters like Ma Zin make their voices heard, also could be on her way to an historic election night this November.