Update Required To play the media you will need to either update your browser to a recent version or update your Flash plugin.
By VOA
Sep 25, 2017


In the thirty days between September 15th and October 15th, the United States observes National Hispanic Heritage Month, celebrating the histories, cultures and contributions of those United States citizens whose ancestors came from Spain, Mexico, the Caribbean and Central and South America.

In 1968, then-President Lyndon B. Johnson, intent on paying tribute to the United States' southern neighbors, proclaimed the week including September 15th and 16th to be National Hispanic Heritage week. The date was specifically chosen because, as stated in the white House proclamation that established the observance, September 15th marks the Independence Day of 5 South American countries--Guatemala, El Salvador, Honduras, Nicaragua and Costa Rica—and September 16 is Mexico's Independence Day. 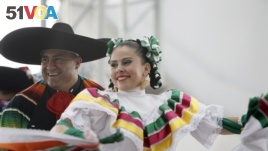 Members of a ballet folklorico perform outside AT&T stadium as part of the Hispanic Heritage Month celebration before an NFL football game. (File)

People of Hispanic heritage have had a profound influence on the United States, contributing significantly to its development.

In 1565, long before any other European set foot on what is today the continental United States, the first Spanish settlers built Fort St. Augustine in Northern Florida. Today, St. Augustine is still a thriving town, the country's oldest continuously occupied city.

In the West, a string of missions along California's coast grew into some of the world's great cities, from San Diego and Los Angeles in the South to Sacramento and San Francisco in the North. And in the South West, Mexican vaqueros herded cattle across the great grass plains North of the Rio Grande over two centuries before the first Texas cowboys began their cross-country cattle drives.

Hispanics have served honorably in the United States Armed Forces, defending the values Americans hold dear. They have transformed industries with innovative ideas. And they have led and inspired movements that have pushed the country toward greater equality and a more just society.

From those with roots that trace back generations, to those who have just set out in pursuit of the promise of America, they have embodied the ideals on which this country is based--that with hard work, anyone can build a better life, and a better future for their children.