An Historic Moment for Zimbabwe

Update Required To play the media you will need to either update your browser to a recent version or update your Flash plugin.
By VOA
Nov 29, 2017


Robert Mugabe resigned the presidency of Zimbabwe last week after Parliament initiated impeachment proceedings against him, ending his oppressive 37-year rule and opening the country to what U.S. Secretary of State Rex Tillerson called “an extraordinary opportunity to set itself on a new path.”

Mugabe was elected as Zimbabwe's first prime minister in 1980 and became president in 1987 after changes to the constitution created an executive presidency. He had remained in power ever since. During his rule, the United States condemned his government's increasing assault on human rights and the rule of law, and joined much of the world community in calling for the Government of Zimbabwe to embrace a peaceful democratic evolution. In his place, former Vice President Emmerson Mnangagwa was sworn in, promising “the beginning of a new unfolding democracy.” 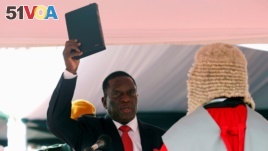 Emmerson Mnangagwa is sworn in as Zimbabwe's president in Harare

“With the resignation of Robert Mugabe, today marks an historic moment for Zimbabwe,” said Secretary Tillerson in a statement. “We congratulate all Zimbabweans who raised their voices and stated peacefully and clearly that the time for change was overdue.”

“The people of Zimbabwe have firmly voiced their desire for a new era to bring an end to Zimbabwe's isolation and allow the country to rejoin the international community. The future of Zimbabwe though has to be determined by the people of that country.”

Secretary Tillerson also said, “We urge Zimbabwe's leaders to implement much-needed political and economic reforms for a more stable and promising future for the Zimbabwean people. We will continue to support the people of Zimbabwe as these reforms move forward.”

U.S. Ambassador to Zimbabwe Harry Thomas noted future U.S. engagement with Zimbabwe, and President Mnangagwa will depend on those actions."This is a new day, this is an opportunity for him and his Cabinet to live up to the wonderful 2013 Zimbabwean constitution. And that is what we will tell them. It is your constitution, it is democratic, it is something you endorsed when you were Minister of Justice and later as Vice President. This is for your people. So live up to it and the United States will find a way to partner."

The United States is the &#8206;largest provider of development and humanitarian assistance to the people of Zimbabwe providing $253 million last year.