Update Required To play the media you will need to either update your browser to a recent version or update your Flash plugin.
By VOA
Dec 14, 2017


Around the world, excess and loosely-secured stockpiles of small arms, light weapons, and munitions, along with landmines and explosive remnants of war, pose a serious danger not only to local populations, but also to regional stability and prosperity.

“The dangers posed by mines and UXO can linger for decades,” wrote Tina Kaidanow, Principal Deputy Assistant Secretary of State for Political-Military Affairs. “In areas reeling from recent fighting, stabilization and humanitarian assistance efforts are effectively blocked until key sites are cleared of explosive hazards. Civilian populations near contaminated land could face permanent injury or death by performing everyday activities such as accessing clean water or walking to work or school.”

That is why the U.S. Department of State funds and manages conventional weapons destruction programs in 47 countries around the world. Its To Walk The Earth In Safety Report, issued in mid-December by the State Department's Office of Weapons Removal and Abatement, highlights our enduring commitment to making post-conflict communities safer and setting the stage for their recovery and development. It also touches on many of the problems these communities must overcome. 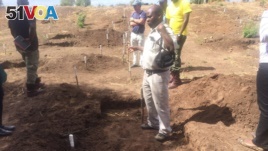 Some of the people involved in the demining exercise showing part of the area that has been cleared of landmines.

In Africa, decades of past conflicts have left behind dense minefields, while porous state borders and weak governments have allowed extremist groups such as Boko Haram and al-Shabaab, to easily arm themselves with weapons and explosives.

In East Asia and the Pacific, due to a series of armed conflicts going back to the 1940s, landmines and unexploded ordnance have remained a persistent threat. Similarly, in the Balkans and in Ukraine, minefields and poorly-secured stockpiles of weapons are also a cause for concern.

In the Middle East and North Africa, efforts at regional stabilization and conflict resolution are hampered by unexploded ordnance and surplus weapons resulting from decades of instability and conflict. The same can be said for Afghanistan and some of its Central Asian neighbors.

And in Latin America, conventional weapons destruction is crucial to stem regional threats of violence and weapons trafficking that go hand in hand with illegal narcotics trafficking and criminal violence.

“Supporting conventional weapons destruction is a cornerstone of our national security policy,” said Principal Deputy Assistant Secretary Kaidanow. “The success of our programs is built on strong bipartisan support from Congress and the people of the United States, who recognize that our nation benefits from helping to create a world in which all may walk the earth in safety.”