Update Required To play the media you will need to either update your browser to a recent version or update your Flash plugin.
By VOA
Dec 6, 2017


The U.N. Security Council convened an emergency meeting on North Korea November 29th -- the ninth such meeting this year -- after the DPRK launched its highest and longest ballistic missile to date, demonstrating the regime's relentless determination to illegally pursue nuclear weapons and the means to deliver them.

U.S. Permanent Representative to the United Nations Nikki Haley warned that the international community has reached a critical decision point. She praised the Council's “unprecedented measures” to try to stop North Korea by deeply cutting into its major export industries and by reducing its military access to the refined petroleum that fuels its war machine. She noted that many nations have taken other strong actions, like restricting or ending diplomatic relations, cutting military ties, and severing trade connections. 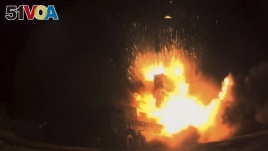 In this photo provided by South Korea Defense Ministry, South Korea's Hyunmoo II missile is fired during an exercise at an undisclosed location in South Korea, Nov. 29, 2017.

But it has not been enough to change the North Korean behavior. Some countries continue to fund North Korea's nuclear program by violating UN sanctions or by failing to implement them fully.

Ambassador Haley says the time of reckoning has come. To ensure a peaceful reckoning, all countries should sever diplomatic relations with North Korea, cut off trade by stopping all imports and exports, and expel all North Korean workers. Also, Ambassador Haley said China should stop supplying crude oil to the DPRK, as it did in 2003; where, soon after, North Korea came to the negotiating table. Extreme options to deal with North Korea's nuclear threat include rescinding its UN voting rights.

“Many countries have made...big economic and political sacrifices by cutting ties with North Korea. They did that to serve the peace and security of all of us,” said Ambassador Haley. “We now turn to [Chinese] President Xi to also take that stand.”

North Korea's latest ballistic missile test “brings the world closer to war, not farther from it, said Ambassador Haley. “We have never sought war with North Korea, and still today we do not seek it. If war does come, it will be because of continued acts of aggression [by North Korea]...And if war comes, make no mistake, the North Korean regime will be utterly destroyed.”

Ambassador Haley declared that “[t]he nations of the world have it within their power to further isolate, diminish, and God willing, reverse the dangerous course of the North Korean regime. We must all do our part to make that happen."