Update Required To play the media you will need to either update your browser to a recent version or update your Flash plugin.
Mohmud Masadde
June 21,2016


MINNEAPOLIS— Ramadan is widely observed in parts of the northern U.S. state of Minnesota; a place a large Muslim community calls home.

An estimated 200,000 Muslims live in Minnesota. When you walk into the businesses and the neighborhoods where Somalis reside, you would assume you are in a Muslim country. At night, houses of worship are full of people saying the so called the “Taraweeh” prayers identified with Ramadan.

Rowda Mosque in Minneapolis is one of the places where worshipers come in masses. Imam Abdirazak Abshir Farah (aka San’ani) talks about the virtue of Ramadan. 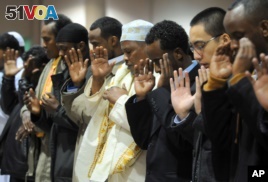 “Muslims who are fasting shouldn't only avoid eating and drinking but all evil deeds as well.”

During Ramadan, people strive to help the poor and the needy. Farhia Isse Qalanjo is a volunteer from the Minnesota branch of “Walaal Afuri,” an organization that helps poor people in Somalia.

“In Somalia, there are people who have no relatives in foreign countries who send them money and are in dire needs. We are collecting the money for them. We don’t know them but we got their contacts through friends.”

Jamal Farah (aka Happy Khalif) is a barber at Karmel Somali Mall. He is also a well-known comedian.

“Since I came to the U.S., I have never cooked food. Maybe, I occasionally make tea for myself. You can find everything in the mall, even there is a buffet upstairs. It is easy.”

Last year, the Minneapolis City Council approved a bill that permits Somali businesses to stay open after regular closing hours during the month of Ramadan. The owner of Safari Restaurant, Abdurahman Abkos believes this came as a result of the prominent role the Somali community plays in the city.

“To extend the hours of operations during the Holy Month of Ramadan is a recognition of the role of the Somali and the Muslim communities in the city.”

This year, Ramadan came in the summer season. People fast between 17-18 hours. Some complain about the high temperature and lengthy hours, but find it spiritually rewarding.