Update Required To play the media you will need to either update your browser to a recent version or update your Flash plugin.
By VOA
Jun 16, 2018


After a controversial constitutional referendum in May raised the possibility of two more terms, Burundi's President Pierre Nkurunziza announced on June 7 that he would not run again in 2020. The United States had criticized the referendum process for a lack of transparency, the suspension of media outlets, and attempts to pressure voters.

Pierre Nkurunziza was elected president by Burundi's parliament in 2005 and re-elected by popular vote in 2010. In 2015, Nkurunziza announced that he would run for a third term, disregarding the term limit provisions of the Arusha Agreement which helped to end Burundi's civil war. 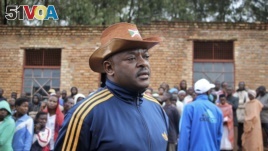 His decision sparked a political and security crisis from which the country has yet to fully recover. This crisis included a failed coup attempt, civil unrest, government repression, and the exodus of political and economic refugees.In 2015, Nkurunziza won the controversial presidential election.

In May of this year, the ruling party organized a constitutional referendum. The United States and other countries voiced concerns that passage of the revised constitution would be interpreted as resetting presidential term limits, allowing President Nkurunziza to run again.

His announcement not to run again in 2020 therefore surprised most observers.

“The United States welcomes President Nkurunziza's recent announcement that he does not intend to seek a fourth term, reaffirming the promise he made to the Burundian people in 2015,” said State Department Spokesperson Heather Nauert in a written statement.

“His decision to step down of his own accord would be a strong step forward for Burundian democracy and would set a positive example for other leaders in the region.

“We call on the government of Burundi to take transparent steps to improve governance, respect for human rights, civic space, and media freedom. These measures are essential for free, fair, and open political competition ahead of the elections in 2020,” she said.

“The United States reiterates our continued commitment to our partnership with Burundi and its people in support of sustainable peace and development.”