Update Required To play the media you will need to either update your browser to a recent version or update your Flash plugin.
By VOA
Jun 12, 2018


President Donald Trump and Chairman Kim Jong Un of the Democratic People's Republic of Korea, or DPRK, held a historic summit in Singapore on June 12.

Both leaders discussed how to build a lasting peace on the Korean Peninsula. In a joint statement, President Trump committed to provide security guarantees to North Korea, and Chairman Kim reaffirmed his unwavering commitment to complete denuclearization of the Korean Peninsula. 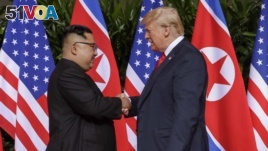 The United States and the DPRK vowed to recover the remains of prisoners of war and those missing in action, including the immediate repatriation of those already identified.

President Trump and Chairman Kim agreed to implementthe joint statement fully and expeditiously. They also committed to hold follow-on negotiations, led by the U.S. Secretary of State Mike Pompeo and a relevant high-level DPRK official, at the earliest possible date, to implement the outcomes of the summit.

“In the meantime,” said President Trump in a press conference, “the sanctions will remain in effect.” But he painted a picture of a potentially much brighter future for North Korea:

“We dream of a future where all Koreans can live together in harmony, where families are reunited and hopes are reborn and where the light of peace chases away the darkness of war. This bright future is within and this is what's happening. It's within our reach.”

President Trump described the historic meeting as “the beginning of an arduous process.” He stressed, “Our eyes are wide open, but peace is always worth the effort, especially in this case.”

“The past,” noted President Trump, “does not have to define the future. Yesterday's conflict does not have to be tomorrow's war. And as history has proven over and over again, adversaries can indeed become friends.” President Trump added that “there is no limit to what North Korea can achieve when it gives up its nuclear weapons and embraces commerce and engagement with the rest of the world.”

“Chairman Kim has the chance to seize an incredible future for his people,” said President Trump. “Anyone can make war, but only the most courageous can make peace.”