Update Required To play the media you will need to either update your browser to a recent version or update your Flash plugin.
By VOA
Jun 9, 2018


The United States condemns the Nicaraguan government's violent response to peaceful Mother's Day marches in Managua and other cities on May 30, including assaults on mothers mourning their children killed since protests began April 18. Government-aligned gunmen and thugs opened fire on the peaceful marches killing 19. At least five more people have been slain in the days since. To date, more than 120 protesters have been killed and over 1,000 injured.

The United States also condemns the beatings of journalists and attacks against local TV and radio stations. The United Nations High Commissioner for Human Rights called on Nicaraguan authorities to ensure the prompt release of some six detained human rights defenders. The UN is also extremely concerned at continuing reports of death threats, acts of violence and intimidation against journalists, students, human rights activists, and members of the Catholic Church, among others. 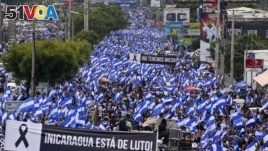 The Office of the UN High Commissioner for Human Rights has reiterated its request made on May 7 to the Nicaraguan authorities to be granted immediate access to the country.

The United States urges an immediate investigation by the independent interdisciplinary group of experts to investigate the deaths and violence in Nicaragua, as agreed upon by the Nicaraguan government and Inter American Commission on Human Rights.

Despite the suspension of the church-led dialogue, the United States supports peaceful, good-faith negotiations to provide a democratic future for all Nicaraguans.