Update Required To play the media you will need to either update your browser to a recent version or update your Flash plugin.
By VOA
Jun 8, 2018


Marking the end of the Islamic holy month of Ramadan, President Donald Trump hosted an Iftar dinner at the White House.

To the group of U.S. cabinet officials and ambassadors from mostly Muslim-majority countries, the President offered a message of unity and respect. 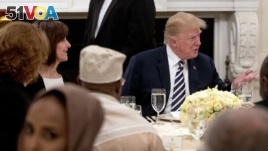 President Donald Trump sits down for an iftar dinner, which breaks a daylong fast, celebrating the Islam's holy month of Ramadan, in the State Dining Room of the White House, June 6, 2018, in Washington.

“To each of you and to the Muslims around the world: Ramadan Mubarak,” he said.

President Trump noted that the iftar dinner is “a sacred tradition of one of the world's great religions,” marking “the coming together of families and friends to celebrate a timeless message of peace, charity and love. It's a moment to call on our highest ideals, and to give thanks for the many blessings we enjoy.”

He expressed gratitude for “the renewed bonds of friendship and cooperation” the United States has forged with its valued partners across the Middle East, and recalled his first foreign trip as President last year to Saudi Arabia, “the heart of the Muslim world.”

“The partnership and solidarity that we established over the past year has only deepened with time,” President Trump declared. “We've made a lot of progress.”

The President concluded with the wish that all “strive to embody the grace and goodwill that mark the Ramadan season. Let us pray for peace and justice,” he said, “and let us resolve that these values will guide us as we work together to build a bright and prosperous future that does honor and glory to God.”