Update Required To play the media you will need to either update your browser to a recent version or update your Flash plugin.
By VOA
Aug 3, 2018


August third marks the anniversary of the assault by ISIS terrorists on the Yezidi community in northern Iraq, during which they sought to destroy this people and their culture. The brutality of the events marked both a disaster for the Yezidi community, and a turning point in the fight against ISIS.

On August 3, 2014, ISIS terrorists overran the city of Sinjar in northern Iraq. The town had a population of 90,000 people, most of them Yezidis, with a small Shia minority. 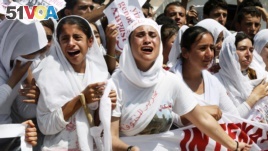 Yezidis are a non-Muslim religious and ethnic minority. They have been viciously targeted and persecuted by ISIS for their beliefs, and have been frequently attacked throughout their history by others.

When ISIS seized control of Sinjar and the surrounding countryside, they immediately began to destroy Yezidi shrines, and to slaughter Yezidi civilians. Thousands of people, particularly men and boys, were executed, while thousands more, especially women and girls, were abducted and raped as sex slaves by ISIS fighters.

Of the 200,000 people who fled from their homes in the city and the surrounding villages, some 50,000 took refuge on Mount Sinjar. There they were surrounded and trapped by ISIS fighters. Within three days, dozens of Yezidis, nearly all of them children, began to die of dehydration. They called family around the world, including in America, begging for help to escape the siege.

On August 4, 2014, the Emir of the Yezidi called on world leaders for assistance. The United States responded, conducting airstrikes against ISIS militants, supporting the delivery of humanitarian assistance through air drops of food and water, and working with Iraqi and other partners.

This was the first action that led to the formation of the international coalition to defeat ISIS, and the beginning of the end for ISIS. By mid-December of 2014 Kurdish forces launched the first phase of the campaign to expel ISIS from Sinjar, liberating part of Sinjar city before the year's end. On November 13, 2015, a day after launching a second offensive, Kurdish and Yezidi forces, backed by coalition airstrikes, fully regained control of Sinjar from ISIS.

The fight against ISIS is a fight of civilization against barbarism. Nowhere was this more clearly demonstrated then in Sinjar.