Stepping Up the Fight Against Human Trafficking

Update Required To play the media you will need to either update your browser to a recent version or update your Flash plugin.
By VOA
Feb 26, 2018


This month, President Donald Trump signed the Department of Homeland Security Blue Campaign Authorization Act of 2017, which will help combat human trafficking as well as protect victims of this crime.

This legislation, signed on February 14th, will officially authorize for the first time the Department of Homeland Security's, or DHS, Blue Campaign, which is the unified voice for DHS efforts to combat and raise awareness regarding human trafficking. 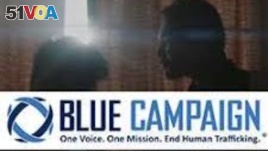 Working in collaboration with law enforcement, government, non-governmental, and private organizations, the Blue Campaign supplements the Department's ongoing efforts and strives to protect the basic right of freedom and to bring those who exploit human lives to justice.

The Blue Campaign also works in collaboration with DHS components such as Homeland Security Investigations, Customs and Border Protection, the Federal Law Enforcement Training Centers, and others to offer training to law enforcement and other stakeholders to increase detection of human trafficking, and to protect victims and bring suspected traffickers to justice. This legislation will allow Blue Campaign to continue this critically important work.

DHS utilizes a victim-centered approach to combat human trafficking, which places equal value on identifying and stabilizing victims and investigating and prosecuting traffickers.

The Department understands how difficult it can be for victims to come forward and work with law enforcement due to their trauma, and remains committed to helping victims feel stable, safe, and secure.

“An estimated 25 million people are currently victims of human trafficking for both sex and labor,” he noted. “Human traffickers prey on their victims by promising a life of hope and greater opportunity, while delivering only enslavement.”

Through the Department of Homeland Security's Blue Campaign, he said, “all Americans can learn to recognize the signs of human trafficking and how to report suspected instances.”