Update Required To play the media you will need to either update your browser to a recent version or update your Flash plugin.
By VOA
Feb 18, 2018


February 6th marked the International Day of Zero Tolerance to Female Genital Mutilation, or Cutting. “The United States stands in solidarity with governments and communities around the world working to end this human rights abuse,” said State Department Spokesperson Heather Nauert in a statement released on February 6th.

According to UNICEF, at least 200 million girls and women alive today have undergone some form of Female Genital Mutilation and Cutting. If current trends continue, an additional fifteen million girls are at risk of being subjected to the practice by 2030. Although it is illegal in most countries, these laws are not always enforced.Female Genital Mutilation is often performed in communities where the value and status of women and girls lags behind that of men and boys. 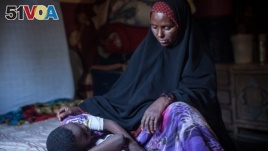 “The United States partners with a broad range of stakeholders—from policymakers and health practitioners to religious leaders and youth activists—to work against Female Genital Mutilation and Cutting, and to raise awareness of the harm it causes to societies,” Ms. Nauert said. “U.S. Department of State officials continue to engage diplomatically with host governments and through bilateral and multilateral partners to end this practice.”

In 2017, the Department contributed $5,000,000 to UN efforts combatting of Female Genital Mutilation, and its annual Country Reports on Human Rights Practices include country-by-country information on the prevalence of the practice and international efforts taken to combat it.

“Building on investments made in previous years to address the problem, we continue to advance initiatives to support survivor-centered programs in countries where Female Genital Mutilation is most prevalent,” Ms. Nauert noted.

The Department's programs promote the abandonment of Female Genital Mutilation and work with communities and civil society organizations to increase their capacity to implement laws and legislation prohibiting it. This fiscal year, USAID is launching a three-year pilot activity in Kenya aimed at combatting the practice of Female Genital Mutilation, and child marriage by tackling the root causes and social motivators that drive these practices, including women's lack of agency, unresponsive health services, inactive protection networks, and limited economic opportunities for women and girls.

“The advancement of women and girls is essential to peace, prosperity, and security,” said Ms. Nauert. The U.S, she said, remains “committed in our efforts to combat all forms of gender-based violence, including of Female Genital Mutilation, and Cutting” and “we renew the call for zero tolerance to end this harmful procedure that affects women and girls in far too many places across the globe.”