Update Required To play the media you will need to either update your browser to a recent version or update your Flash plugin.
By Ray McDonald
Feb 2, 2017


This is the Top Five Countdown! We're cranking up the five most popular songs in the Billboard Hot 100 Pop Singles chart, for the week ending February 4, 2017.

It's another week where the deck gets shuffled but no new cards are dealt.

It's a good week for The Weeknd: while he commands the Billboard Album chart for a fourth week, he also remains in our Hot 100 Top Five: “Starboy” slips a slot to fifth place. 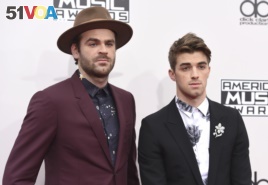 Alex Pall, left, and Andrew Taggart, of The Chainsmokers, arrive at the American Music Awards at the Microsoft Theater in Los Angeles.

The Chainsmokers and Halsey remain strong, as “Closer” recovers a slot in fourth place. Last month, Halsey took to Instagram to reveal that she'd undergone multiple surgeries for the abdominal condition endometriosis.

Holding in third place are Rae Sremmurd and Gucci Mane with “Black Beatles” – which like all our other songs today, spent some time at number one. Who's the man behind this viral hit? Mike WiLL Made-It, and while his name may not sound familiar, you've probably heard his other hits: “We Can't Stop” by Miley Cyrus; “Love Me” from Lil Wayne; “Pour It Up” by Rihanna and let's not forget Nicki Minaj's “Black Beatles” remix, “Black Barbies.”

Number 2: Ed Sheeran "Shape of You"

Ed Sheeran loses his Hot 100 crown after one week, as “Shape Of You” slips to second place. This week Ed dropped the video, which shows him training for a boxing match, and ending up going against a sumo wrestler. Sheeran says he spent much of last year drinking beer and really packed on the weight. He's currently getting in fighting shape for the March 3 arrival of his Divide album and subsequent tour.

Back to number one go Migos and Lil Uzi Vert with “Bad And Boujee.” Rap fans who want to see Migos perform at the Super Bowl have launched an online petition on the change.org web site. Nearly 60,000 supporters have signed the document asking the rap trio to replace Lady Gaga on February 5.

That may not happen, but we'll be here next week with a new hit list.