Top 5 Songs for Week Ending May 21

Update Required To play the media you will need to either update your browser to a recent version or update your Flash plugin.
Ray McDonald
May 20,2016


These are the five most popular songs in the Billboard Hot 100 Pop Singles chart, for the week ending May 21, 2016.

Although Prince briefly returned us to the 80’s last week, this week's lineup finds us firmly rooted in the present.

These five women formed on July 27, 2012 on the now-defunct U.S. edition of The X Factor. Simon Cowell and Demi Lovato brought them together at the end of boot camp. They’re naming their second album 7/27 to commemorate the big day…it drops on May 27. 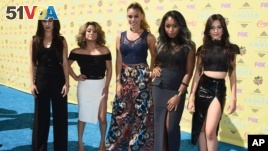 FILE - 5th Harmony arrives at the Teen Choice Awards at the Galen Center.

Number 4: Mike Posner "I Took A Pill in Ibiza"

Mike Posner also reaches new chart heights, as “I Took A Pill In Ibiza” jumps a notch to fourth place. Last week, Mike dropped his second album, At Night, Alone. He tells Entertainment Weekly that the album is built around honesty.

It caps a six-year period which saw Mike put aside two full albums for the RCA label before jumping to Island Records. Starting June 29, Mike will tour the U.S. with Nick Jonas and Demi Lovato.

Lukas Graham again hangs tough, as “7 Years” stays put in third place. What should we take away from this song?

Lead singer Lukas Graham Forchhammer says fans hear an overwhelming sense of family and belonging in the song. He says the lyrical age progression makes it relatable, while the lack of a real hook makes it stand out from competing tracks. Lukas says it’s important that we all find our own meaning.

Desiigner’s “Panda” is also a bit open-ended…but that didn’t stop it from shooting to the top. This week it backs off a slot to second place.

The Brooklyn, New York rapper dropped the video last week, while also making his TV debut with a performance on the Late Show with Stephen Colbert.

Up at number one, Drake makes Hot 100 history with “One Dance.” But wait – hasn’t he been here before?

This time, it’s as a lead artist…for the first time in his career. It’s also a memorable week for Wizkid, who becomes the first Nigerian artist to rule the Hot 100 chart.

That’s it for now, but the charts never sleep! Join us in seven days and we’ll do it all over again.