Update Required To play the media you will need to either update your browser to a recent version or update your Flash plugin.
By VOA
Apr 2, 2018


On March 19, 2018, the U.S. Department of the Treasury's Office of Foreign Assets Control sanctioned four current or former Venezuelan government officials.These individuals contributed to the historic collapse of Venezuela's economy, including hyperinflation, food and medicine shortages, and a humanitarian crisis with significant and growing consequences for the region. These officials were also actively involved in the endemic corruption and economic mismanagement that have been defining features of the Maduro regime. 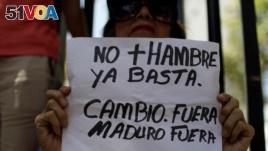 A woman holds a placard that reads "No more hunger. Stop. Change. Out Maduro Out." Caracas, Venezuela, March 17, 2018.

Willian Antonio Contreras is the head of the Superintendence for the Defense of Socioeconomic Rights (known locally as “SUNDDE”), the agency responsible for imposing price controls in Venezuela. The price controls imposed on factories, supermarkets, and multinational companies by SUNDDE while Mr. Contreras was in charge have left businesses unable to afford to import raw materials or products, and have shuttered companies and contributed to sharp drops in production and employment.

Nelson Reinaldo Lepaje Salazar was until recently the Head of the Office of the National Treasury of Venezuela. The pervasive mismanagement and corruption in currency controls under the purview of this office significantly contributed to the collapse of Venezuela's economy and to hyperinflation.

Carlos Alberto Rotondaro Cova is the former President of the Board of Directors of the Venezuelan Institute of Social Security, the government agency tasked with social services, such as pensions and medications. Rampant corruption and mismanagement in IVSS have contributed to Venezuela's inability to purchase, produce, or distribute sufficient quantities of medications or provide medical services to the population in need.

All assets of these current or former officials of the government of Venezuela that are subject to U.S. jurisdiction are frozen, and Americans are generally prohibited from dealing with them.

The United States calls for the Venezuelan government to permit the entry of food, medicine, and humanitarian assistance. And the United States stands with the hemisphere in support of the Venezuelan people, and will continue to take strong and swift action to prevent the theft of Venezuela's wealth by corrupt individuals in the Maduro regime.